When the Washington Post’s Express commuter tabloid abruptly shut down last week, dozens of distributors who hawk the papers around Metro stations were left without a job, their futures uncertain.

Express’s 16-year run was made memorable by the friendly men and women who would greet commuters each morning, papers in hand. Now one reader is trying to ensure they’re not forgotten.

While the Post’s Union works to try to make sure the 20 laid off Express staffers are hired elsewhere, amid a tough time for local media employment, a local IT project manager has organized a GoFundMe campaign for the 75 Express distributors, who worked for a third-party company contracted by the Post. 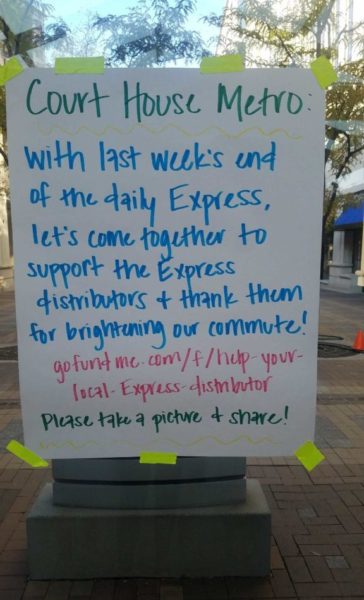 “In order to help these kind-hearted individuals who brightened the day of thousands of commuters for many years, we would love to see the greater community come together and offer support in order to keep them on their feet while they look for new opportunities,” wrote fundraiser organizer Annie D’Amato.

Word about the campaign is being spread at local Metro stations, including the Courthouse station where flyers and posters were placed around the entrances Monday.

D’Amato is seeking volunteers to print the flyers and post them at more local stations. In addition to the Courthouse station, flyers were found at a number of stations in the District yesterday.

Meanwhile, some Express distributors are still working on behalf of the Post — passing out coupons for free digital subscriptions to the Post itself. At least one other returned to his usual Metro station, asking for help.

I saw the same thing outside the Brookland station. https://t.co/x8hmOMDnCu

The former @WaPoExpress distributor at L'Enfant is standing outside the station this morning, wearing his branded hat and apron and with a sign explaining the paper folded and asking for help.

The GoFundMe campaign remains far from its fundraising goal, but donations continue flowing in.

“Raising $75,000 would be enough to give them each $1,000, but any amount collected above or below that goal will be distributed evenly between all of the workers,” wrote D’Amato. “Whether your commute has been made better by the friendly face and greeting of an Express worker, or you just want to help and support those in need, please consider donating to this campaign.”