Arlington officials have proposed two preliminary designs for the replacement of Fire Station 8 on Lee Highway.

The designs will be discussed tonight at a 7 p.m. public community meeting in the Langston-Brown Community Center (2121 N. Culpepper Street).

In July, the county asked residents in an online survey which outdoor features they’d like to see at the new station. There were 164 responses, with a “historic map” as the top request.

All of the outdoor features in question — a historic map, seating wall, exterior skin, beacon of light, and virtue monuments — are distributed between two design proposals. 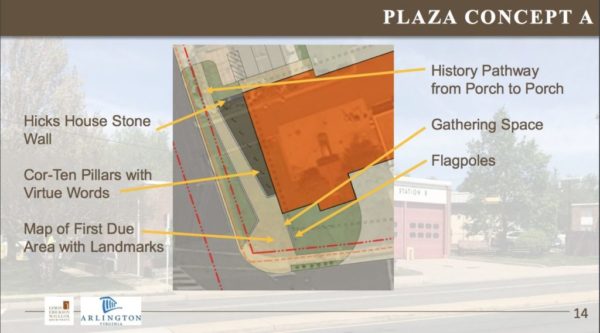 The design process was conducted with the fire station’s history in mind. For decades, Fire Station 8 was the only station in Arlington staffed by African-Americans — members of the Hall’s Hill Volunteer Fire Department.

Designed by the architecture firm Lemay Erickson Wilcox, the firm aims to “pay homage to the past while providing an updated and modern facility for this 21st-century fire department and the community it serves.”

One of the proposed designs, “Plaza Concept A” would feature a salvaged stone wall made from the Hicks family house, memorializing the importance of the Hicks family, which owned businesses along Lee Highway and in 1934 provided the land — at the intersection with N. Culpeper Street — on which the fire station now sits.

Additional “Plaza Concept A” features include the requested historic map, designed as a stone outline of the Station 8 coverage area, plus landmarks of the Hall’s Hill neighborhood. 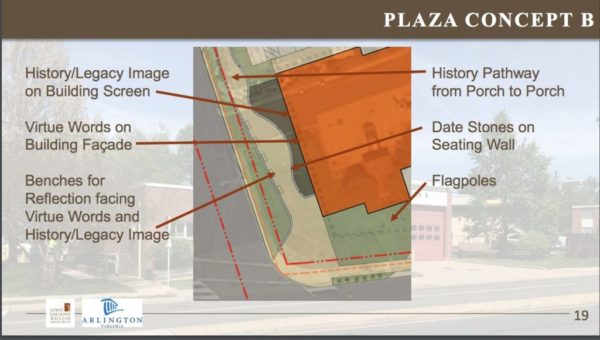 Alternatively, “Plaza Concept B” would feature a large perforated metal screen on the outside of the station, depicting a historical image of the station to be seen by cars which drive by.

A seating wall wrapped around the edge of the “Plaza Concept B” would provide seating areas for the public and firefighters, with historical dates written throughout.

The county is still a ways away from breaking ground. The $21 million reconstruction project for the 100-year-old station is expected to officially kick off next fall, with full completion slated for fall 2022.

END_OF_DOCUMENT_TOKEN_TO_BE_REPLACED

More Stories
Major Changes Coming to Boundary Channel Drive and I-395 InterchangeSmall Biz Focus: Why Online Reviews Matter — The Obvious and Not So Obvious