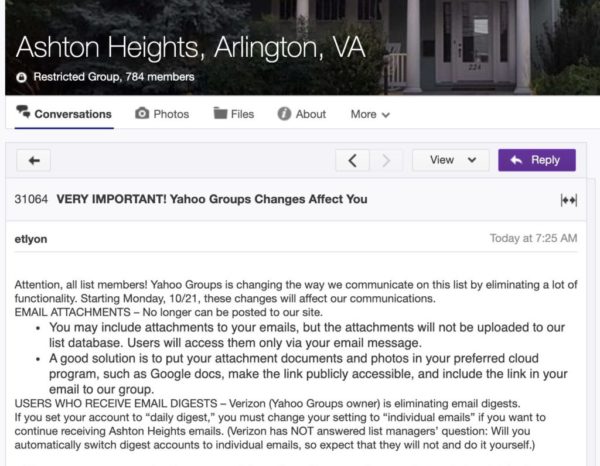 Local groups including Mothers of North Arlington (MONA) and the Alcova Heights Community Association were left scrambling last week after Yahoo announced it would be shuttering its still-widely-used online messaging tool, Yahoo! Groups.

“This listserv was very valuable to the neighborhood,” said Mark Wigfield, the moderator for the Barcroft School & Civic League chat list (Bsclchat). “People [used it to] chat back and forth about hiring plumbers and carpenters, local issues, crime reports, ‘curb alerts’ for stuff they’re putting out on the curb for the taking, and more.”

As of today, some affected Arlington groups are steadily figuring out how to transition their organizations out of Yahoo and onto other platforms. Alcova Heights, for example, has already converted to using Google Groups.

Over the weekend, MONA board members unanimously voted to move their forums over to the email platform groups.io. MONA had used Yahoo! Groups since 2001 and has over 2,300 members.

“After a rigorous testing of groups.io by a special testing group we set up, we are confident and comfortable in our choice of the new, enhanced platform and feel this will be a change for the better,” said MONA President Mrinal Oberoi.

In 2014, MONA’s then-president resigned amid a backlash over transitioning the organization away from Yahoo! Groups.

Yahoo announced last week its plans to shut down its forums, giving its hundreds of thousands of members until Monday, October 28 — the original announcement said it would happen on October 21, but that date was later changed — to use the service. Users will then have until December 14 to access archived messages. Email functionality will remain, for now, but without attachments, archives and other features.

“I’m a little reluctant to let our archives disappear into the ether — I think [the] Bsclchat has been around for at least 20 years, so that’s a lot of history,” said Wigfield.

Across Arlington, social and community groups utilize listservs like Yahoo! Groups as a way to communicate and encourage discussions with residents and members. The message board functionality allows discussions to take place without a deluge of emails to subscribers.