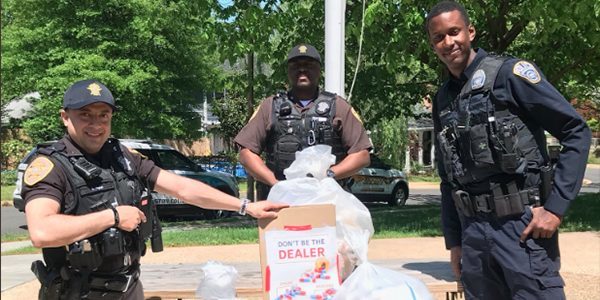 Local and federal law enforcement agencies are organizing an event to dispose of unwanted medications.

The event is a part of an annual, nationwide movement of police departments encouraging Americans to dispose of extra or unused medications to prevent them from being sold illegally, ingested accidentally, or disposed of improperly.

Needles will not be accepted at any of the three sites on Saturday — only pills and patches can be dropped off during the event.

“To safely dispose of sharps, Arlington County recommends placing the item in a hard-plastic container, such as a detergent bottle, securing the container and placing it in your trash cart,” ACPD noted in its press release about the event. “Do not put this container in your recycling.”

Arlington has also installed several drug drop-off boxes around the county where people can dispose of unwanted medications anytime. However, the boxes only accept pills, vitamins, ointments, and patches.

So far, ACPD says the county has collected 2,816 pounds of drugs via the boxes since installing three of them last year. After collecting 1,000 pounds last year, the department added a new box in the beginning of 2019.

The boxes are available for drop-offs anytime and are installed in the side of the following buildings: