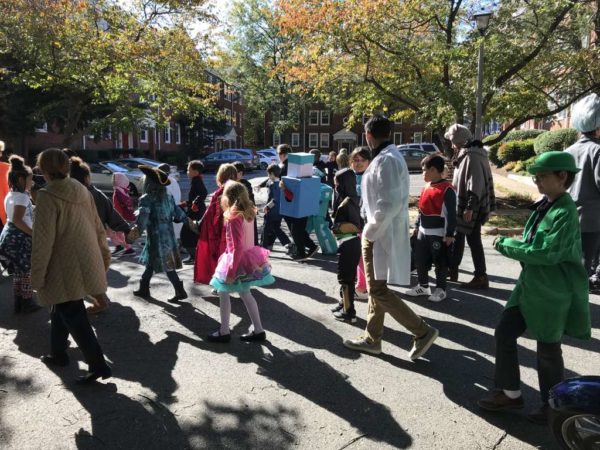 (Updated at 1:20 p.m.) Rain is in the forecast for Halloween, but Arlingtonians should nonetheless expect trick-or-treaters out on local roads and sidewalks Thursday evening.

There is no official trick-or-treating time in Arlington, as there is in some places, but typically the evening costume-wearing and candy-gathering starts around 6 p.m. on Halloween night (Oct. 31) and runs until 8-9 p.m.

As in years past, here are some trick-or-treating tips:

Arlington County says the Columbia Pike corridor is the most active trick-or-treating area in the county, while Crystal City and Pentagon City is the least active.

The county as a whole has a lower proportion of households with children than other, similar communities, but there are still Halloween hot spots in single-family residential neighborhoods and some condo communities, like Fairlington — which also has its own Halloween parade on Oct. 31.

Ghosts and goblins, princesses and superheroes will be showing up at Arlington’s 28,500 single family homes, 11,200 townhouse style homes and 75,600 condos and apartments* on Oct. 31.

According to Arlington Public Schools enrollment figures, if you live along the Columbia Pike Corridor, you’ll probably see the most kids, while those along the Route 1 Corridor will likely see the fewest. Residents living in single family neighborhoods can expect a steady stream of knocks on the door throughout the evening.

An accurate census count is critical for Arlington and other communities across the country as the data is used to fund schools, roads, hospitals, fire departments, and other services. Whether it can also help you plan how much Halloween candy to buy remains to be seen, but we know this: no matter how many kids come to your door, they will be expecting a treat!

As for what to do with those leftover pumpkins? They can be dropped off for composting at Arlington’s Earth Products Yard in Shirlington (4300 29th Street S.) from 8 a.m.-4:30 p.m. on Saturday, Nov. 2.

More from the county:

Give your Jack-o’-lantern new life after Halloween by dropping it off for composting. The Arlington County Solid Waste Bureau will use the organic results in parks and other landscaping endeavors. The drop-off is part of the free monthly services – including free paper shredding – at the Earth Products Recycling Yard in Shirlington.