Crews are now starting work on the walls for the long-awaited, long-debated Long Bridge Aquatics and Center near Crystal City.

Arlington County tweeted that the final beam was lifted into place last week for the controversial $60 million recreational center at 475 Long Bridge Drive. Officials say the next steps will be setting up walls and pouring pool foundations. 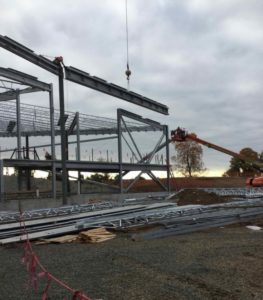 “The building’s structural steel work is nearing completion and concrete for the 50-meter pool is being formed and poured,” Department of Parks and Recreation spokeswoman Susan Kalish told ARLnow.

The final design includes a 50-meter pool with diving towers, as well as a family pool and public fitness space — and $410,000 video screens.

Arlington officials have already budgeted for two full-time staffers to run the facility once it opens.

Kalish also confirmed that last year’s record-breaking rain did not interfere with the construction timetable — even if it did dampen the groundbreaking ceremony.

“Weather has not had any effect on the schedule,” she said. The wet weather reportedly delayed construction projects across the region.

The aquatics center is expected to open at the beginning of 2021, and officials hope it will serve everyone from middle schoolers to competitive swimmers who currently train at the high school pools.

Image (below) via Twitter/Arlington County