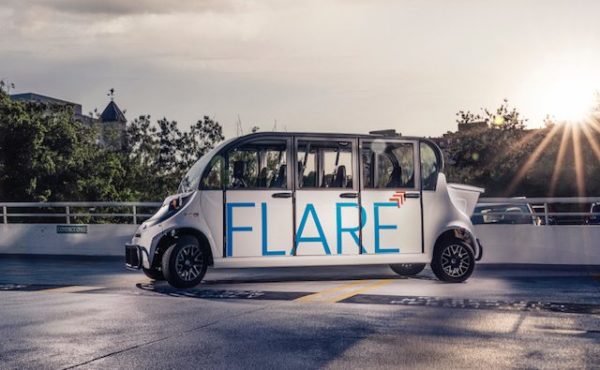 A new, eco-friendly form of transportation is in the works for some residents along Columbia Pike.

Electric shuttle company FLARE Technology and Services is in the process of securing contracts with several apartment buildings in south Arlington. Once finalized, residents those buildings will be able to use the free service — offered as an amenity — to shuttle anywhere they might not have immediate access to, such as a Metro station or grocery store.

The service will be exclusive to the apartment residents, meaning those who stumble upon the cars along Columbia Pike will not be able to hop in, clarified FLARE CEO Andres Delgado.

Delgado said he hopes to have FLARE ready by the start of next year. In the meantime, the business will host a ribbon cutting ceremony at the Arlington Economic Development office in Ballston today (Tuesday).

“There are many desirable places to live within Arlington County, but everyone is not able to live in locations with easy access to transit,” said Delgado in a statement. “We created FLARE as a solution to solve the connectivity problem within Arlington and in the greater D.C. metro area.”

The company’s white vehicles, which look a bit like stretched-out golf carts with doors, have spent the last several weeks testing rides in the Shirlington area.

“We were able to drive people in Shirlington from a farmers market, to their apartments, to the grocery store,” said Delgado, “and it was awesome.”

Delgado emphasized that he is working with his co-founder, Chris Yeazel, to eventually have an app-based subscription service available for public use.

“Then anyone in the neighborhood will be able to jump on,” he said.

Another free ride service, Sprynt, hit the streets in Arlington in 2017. A “100% electric on-demand” ride, the service was paid for by advertisers, but the company stopped operating a year later.