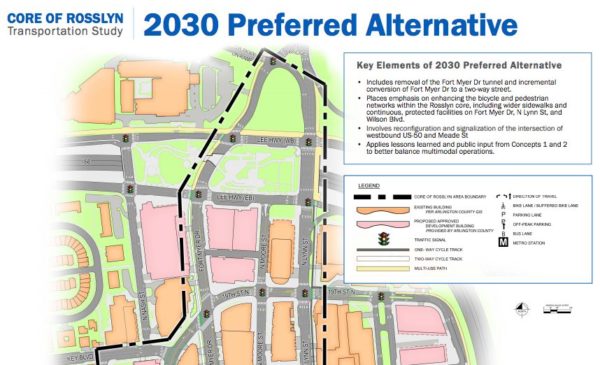 A ten-year plan for the future of transportation in Rosslyn has been finalized after county officials spent two years of gathering public feedback.

In 2015, the Arlington County Board adopted the Rosslyn Sector Plan, which included a vision for what the neighborhood’s street networks could look like by 2030. Later in 2017, the Core of Rosslyn study was introduced as an effort from the County Board to analyze the feasibility and potential impacts of the Sector Plan’s proposed changes.

“With the understanding of all of the future developments coming to the area, we wanted to make sure private developments would not be affected by this plan,” county transportation spokesman Eric Balliet told ARLnow.

After two years working on the study, county staff have finalized their “Preferred Alternative Plan,” which outlines several substantial projects to be built by 2030. 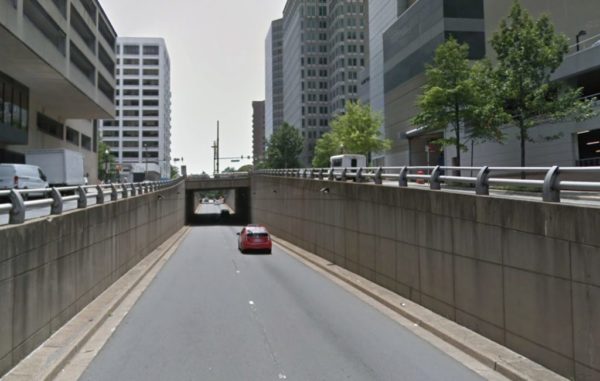 Funding for the projects will be determined when the County Manager Mark Schwartz updates Arlington’s Capital Improvement Plan in May, Balliet said. County Board adoption of the plan is expected later in the summer.

County staff will continue to engage with the community on each project and each new project will have its own webpage, according to Balliet.

The study itself cost about $1 million, Balliet said.

One project outlined in the “Alternative Plan” is already underway: the first stage of the Dark Star Park (1655 N. Fort Myer Drive) slip lane closure and park expansion occurred in July, funded through county operating funds and a partnership with the Rosslyn Business Improvement District.

Photo (top) via Arlington County, (below) via Google Maps