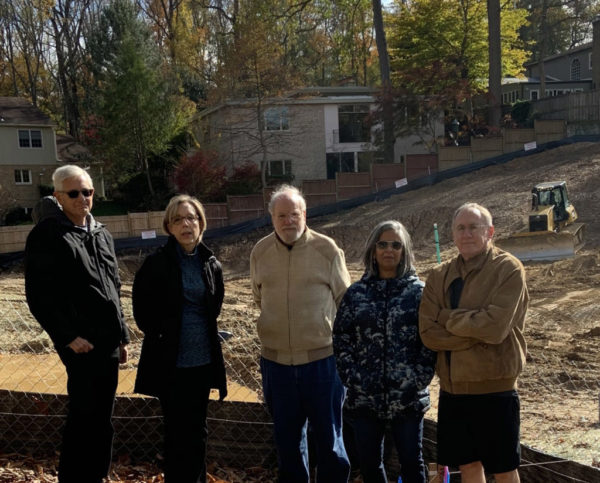 At least one County Board member could be pushing to change setback regulations in a bid to provide more of a buffer between homes.

Arlington County Board member Libby Garvey recently visited an infill residential development on N. River Street, near McLean, with several neighbors she said were upset that a developer clear-cut trees on the lot and is planning to build several homes that could be located close to the neighbors.

Garvey tweeted about the issue last weekend, posting photos of the project in Arlington’s tony Chain Bridge Forest neighborhood, which in September prompted a petition from neighbors concerned about mass tree removal, a loss of privacy and decreased home values.

“This destruction has caused substantial harm to surrounding neighbors who previously had a natural green oasis abutting their backyards,” the petition says.

“I actually went to our top lawyer and said ‘This is really terrible is there something we can do?'” Garvey told ARLnow. “And he said ‘Well, maybe setbacks.'”

Garvey said state laws prevent Board members from intervening on most matters related to tree removal on private property, but the Board could weigh in on the distance required between houses — as members did earlier this year when considering accessory dwelling units.

The idea is that requiring a larger distance between buildings could help preserve existing mature trees instead of incentivizing property owners to cut them down.

Saw by-right development that clear cut large lot and is harming trees near site. Need to examine regs that can encourage such projects. pic.twitter.com/DFMytdZPRJ

“You got a lot of turnover of the baby boomers starting to move on, downsize, leave their home,” she said. “Some of those homes tend to be those smaller homes with a whole lot of yard and not a whole lot of house — and that makes for an opportunity there.”

However, trees can also help absorb storm runoff — a topic of discussion that gained new urgency after this summer’s flash flood, which sparked conversations about the need for urgent stormwater management solutions.

When asked whether those discussions led her to request the regulatory review, Garvey said she has always been an advocate for preserving Arlington’s tree canopy.

“Looking at a big tree-covered lot turn into a big mud pie is just upsetting to everyone,” she said. “But the community as whole is more aware of [the importance of trees.]”

Garvey said she expects the review of setback regulations to take “a few months” and result in a set of recommendations to the Board.

The Board has been long-criticized by environmental activists before for its failure to preserve trees on private properties, as well as public parks.

Board members have frequently cited state laws that prevent them from interceding on private property, with former member John Vihstadt (I) once describing Virginia as a “‘mother-may-I’ state.”