Following weeks of fallout from the July 8 storm, Arlington officials are discussing a new program for tackling future floods.

The program “builds upon” the 2014 Stormwater Master Plan, which outlined improvements to Arlington’s stormwater management systems, streams, and watersheds over the next 20 years, according to DES Chief Operating Officer Mike Moon.

“We hear about climate change, and it always seems to be somewhere else,” said Vice Board Chair Libby Garvey. “People tend to think and accuse the government of not doing something right, they don’t buy the climate change reason, so we have a level of education we [owe].”

Funding for Flood Resilient Arlington will not be established for “eight to nine months,” said Moon.

The next steps include approximately 80 visits from Board members beginning this month to sites deemed a “high risk” for flooding, or homes that received more than four feet of water during the July 8 storm. During the Tuesday presentation, McBride listed several neighborhoods — such as Waverley Hills, Westover, and Rock Spring — as high risk for future flooding based on past data. She highlighted steps homeowners can take to stay dry.

“I realize this is emotional for people, your home is a big investment,” McBride said. “They have families and children and they’re concerned for their safety.” 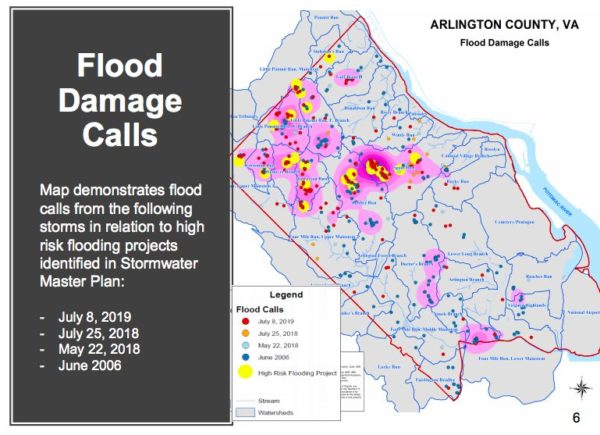 During the meetings, the public can expect to:

McBride stressed homeowners need to educate themselves on flood insurance policies, also noting the county needs to step in with educational resources.

Several residents told ARLnow in the flood’s aftermath they had received conflicting information about their eligibility for flood insurance and were left fearing they would have to bear tens of thousands of dollars in repair costs.

During the disaster, dozens of residents fled their homes, a few beloved Arlington businesses closed for repairs, six pedestrian bridges were washed away, and thousands of dollars were raised on platforms such as GoFundMe. The county stated days later it would not cover any sewage overflow damage caused by the flood, telling ARLnow it would violate state law.

Since then, residents have applied for over $2.1 million in U.S. Small Business Administration (SBA) disaster loans, Schwartz shared, and Arlington businesses have applied for more than $100,000 in loans. Applicants can still file for a loan by Monday, October 7.

“During a majority of the 1,100 damage reports [this summer], people had insurance and thought they were protected, and then they realized there were exemptions and exclusions,” said McBride. “That’s a gap we would help to close.”

In addition to damage to private property, Arlington County reported $5.8 million in damage to county property and Joint Base Myer-Henderson Hall reported damage to 26 buildings.

McBride said Arlington will have to slowly overhaul its public infrastructure through several long-term projects — like upgrading the stormwater pipes, developing large tanks for water storage, and property acquisition — to help address the flood risk.

“These [will require] long-term disruption of neighborhoods,” she said. “I wish we could avoid that, but we’re simply not going to be able to and that’s going to be a partnership we need to have with the public.” 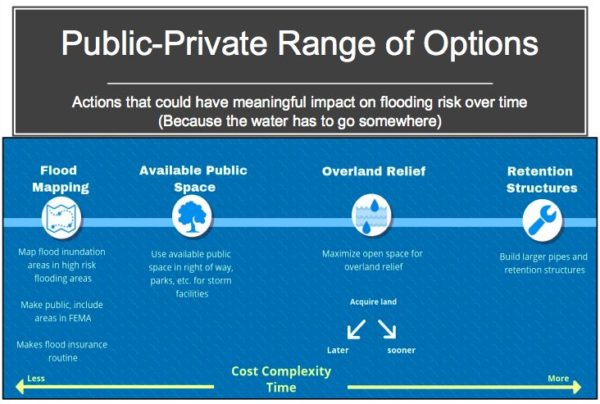 Board Member Erik Gutshall asked McBride whether the intensity of the storm — which dumped 3-4 inches of rain on Arlington in one hour — was to blame or if theories such as clogged storm drains could’ve added to the widespread damage.

While McBride did not directly address the question of clogged drains, she said storm’s rapid rate of rainfall was what made it so catastrophic. She compared it to Hurricane Agnes in 1972, which dumped four times as much rain but over a longer period.

“The hurricane ultimately resulted in more rainfall, but there was some manageable opportunity for it to disperse,” McBride said. “But [the rate that] fell in a little over half hour… that sheer volume quickly overwhelmed the system and it had to go somewhere.”

“When our team goes to public meetings we say that our goal is to manage, not to eliminate, because nature is always going to be able to send a larger storm,” she added. 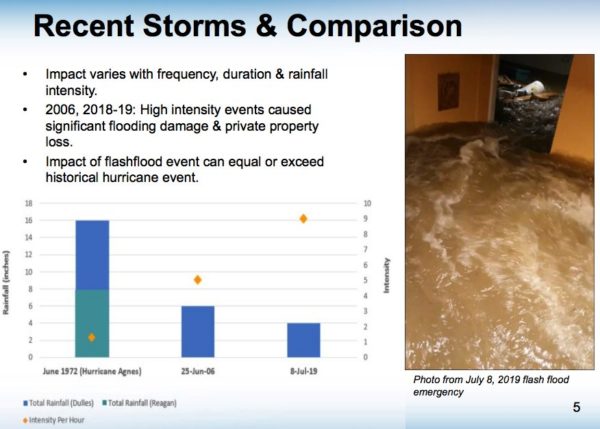 “Using data collected from a stream gauge at Four Mile Run, at 8:50 a.m. on July 8, the gauge read 5 feet, which is normal,” said Aaron Miller, director of the Department of Public Safety Communications and Emergency Management. “At 9:30 a.m., the gauge was at 13 feet, and it shortly peaked at over 15 feet.”

This amounted to 3.7 million gallons of water — or the equivalent of 5 olympic-size swimming pools — added to the stream per minute during the flood, Miller shared.

County officials noted that development over the course of the 20th century resulted in Arlington changing from mostly farmland to mostly residential neighborhoods and commercial corridors, with entire networks of streams sent underground in stormwater pipes that were appropriate for the climate and standards of the time — standards that now appear to be out of date.

As for what homeowners can do immediately — aside from attending the October forums — McBride advises residents to sign up for Arlington Alert, ask insurance agents about flood and sewer backup insurance options, and to stay engaged with the county government. 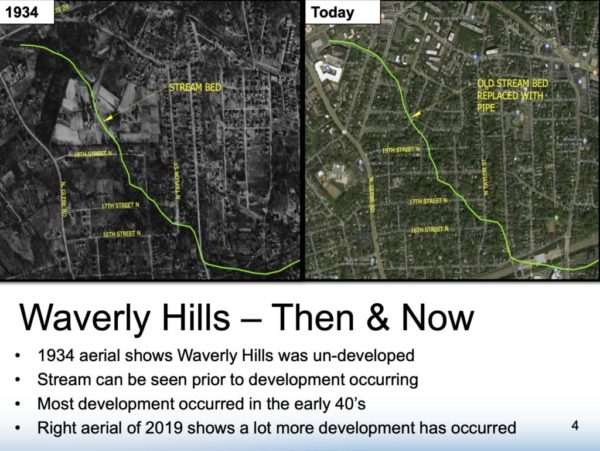