(Updated at 2:30 p.m.) Residents hit hard by floods across Arlington are worrying about how to pay the repair costs.

For several residents in Westover, flood waters reached several feet high in their homes, destroying wood floors and appliances as well as cars and finished basements. Residents are still totaling the cost of the damages, but the majority said their homeowner’s insurance isn’t covering it — and most do not have flood insurance.

When ARLnow visited the Westover neighborhood Wednesday afternoon, mud still caked the pavement and friends and families were carrying out furniture to the county’s waiting trash truck.

“It happened very fast,” said neighbor Melinda Root. “I looked at my door and it was like looking at a weird aquarium.”

Root said at around 9 a.m. Monday, brown water rushed into the first floor of her house after rising outside, pouring up from the floorboards and in from the doors.

The inundation lasted about an hour, filling the basement to the ceiling and rising almost three feet on the first floor where it destroyed the carpet, kitchen appliances, as well as photographs and clothing. Outside, the water rose several feet high and flooded the engine of her car.

“The first thing I thought of was my cat,” Root said of her 13-year old friendly feline Chloe.

Root’s husband John DeMarce was at work when the storm hit, and was able to get Dominion Energy to cut the power to the house. When he arrived back in Westover, the floods had damaged thousands of dollars worth of tools in his woodworking shop in the basement and contaminated the carpet throughout the first floor.

“I’ve thrown away hundreds of books and CDs,” said DeMarce. Since then, he’s been ripping up the carpet himself and worries that the floor is now a mold risk, too.

He and his wife said they were very grateful to friends who are giving them a place to stay and are trying to clean 14 loads of laundry for them to save some of their clothes.

“We’re all in these same boat,’ said Root. “But that’s kind of a weird thing to say about a flood.”

Across the street, Athena Burkett, her husband Kenny Puk, and their friends were carrying away all her furniture to the curb after the water rose two feet inside her house and filled her basement.

Silt caked the hardwood floors in the first floor, and a light smell of sewage still pervades on Wednesday afternoon in the home even with the windows open and several fans running for days.

“It so much better than it was,” she said.

Burkett says she tried to come back to house Monday morning when she heard about the flooding but couldn’t drive through the river that filled her street.

“I stood right there up on that hill and watched as it happened,” she said of the top of the street.

The currents were so strong they lifted her shed and moved it almost two feet into her neighbor’s yard, half-crushing a floating chair that Kenny Puk jokes is now “the wicked witch of the west Adirondack chair” or “Excalibur.” Her family’s car is also totaled. A group of friends set up a cleaning shop in the backyard to salvage some metal shelves from the house.

Now plastic lines the second floor staircase inside the house to where she’s stored the few pieces of furniture that survived. The plastic is held down with neat stacks of books that with waterlogged covers. Storm water ruined the rest of her furniture, most of her appliances — and her wedding album.

“Yeah. I’m kind of in shock,” said Burkett, who’s only owned the house for two years.

Like Root and DeMarce, Burkett also lost her HVAC system, hot water heater, washer and dryer, and car to the floods. Both sets of neighbors said their homes are uninhabitable right now.

And as for homeowners insurance? “We’re getting nothing,” Burkett said. 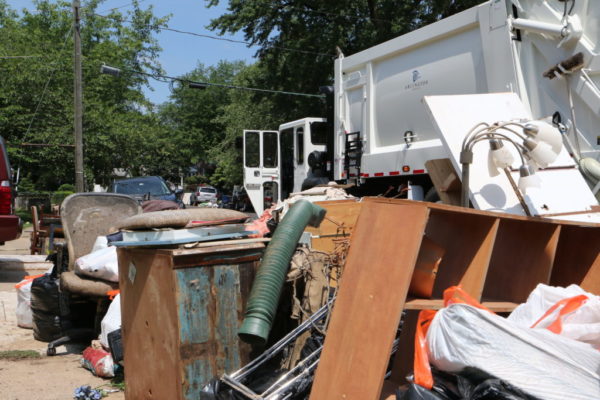 “There were produce boxes from Westover Market in peoples’ front yards,” said another neighbor, Nicole Bender. “The path of the river cut across several yards and broke through fences along the way.”

Bender hadn’t seen anyone form the county checking on the clean-up efforts until Wednesday morning. “I don’t think they realized the level of damage,” she said.

Carpet scraps and personal effects lined 14th Street N. in Westover — one of the hardest-hit areas of the county — and for Wayne Blankenship, that includes her 30-year collection of hundreds of signed vinyl records. He spread racks of records on bed slats in his front yard under the hot sun, but Blankenship isn’t sure they’re salvageable.

He’s also worried about the hardwood on the first floor, which is starting to buckle after flood waters rose 6 inches in the home and filled his finished basement in “thirty seconds.” The rise was so forceful it exploded an egress window in the basement, and ripped two basement doors in half.

The power stayed on even though the circuit breaker was underwater, and Blankenship says he’s grateful that he didn’t get electrocuted when wading through the water. He’s also thankful for friends who’ve given them a place to stay and helped rip out drywall in the basement.

“There is humanity,” he laughs. “It does exist.”

Blankenship bought pumps from Home Depot to help his neighbors clear out their own floodwater. Others banded together to buy wagons full of food for each other or loan a hand with ripping out drywall.

Blankenship has lived on the street for 23 years with his husband Maxwell Tourgersen, with whom he recently celebrated his 35 anniversary. Together the two recently spent $30,000 renovating their basement.

“We just got the house the way we wanted it!” Blankenship lamented.

He estimates it will cost at least that, plus $18,000 for a new water heater and furnace, to do it again. Upstairs, he thinks it will cost $26,000 just to repair the kitchen. Like Beckett, he didn’t have flood insurance and his homeowner’s insurance isn’t paying a dime.

“This is going to be all out of pocket,” he said.

‘Too Early to Tell’

The Arlington County Fire Department responded to at least 25 swift water rescue calls on Monday as commuters were trapped on roads turned to rivers. All told, the floods caused an estimated $3.5 million in damage to county-owned infrastructure alone. Private donations have also poured in for Westover businesses swamped with stormwater.

Arlington residents and business owners are being asked to submit a form online about the storm damage. The “crisis track” form could be used to send information to FEMA, according to the website.

Solid Waste Bureau Chief Erik Grabowsky said the county has been busy handling bulk trash collection of flood-damaged materials. He asked residents to follow the county’s meticulous guidelines for trash pick-up when placing debris on the curb, frustrating some Westover residents who felt they were already struggling because of a lack of help from the county.

“I think it’s ridiculous that they’re not going around helping people,” said Maxwell Torgersen. “Instead they’re telling people how to separate the ruined contents of their homes.”

(Later Thursday morning, the county apologized for notices issued to flood-impacted residents for not arranging their trash properly.)

FEMA assistance could be welcome relief to many residents beyond Westover as well. Numerous other Arlington neighborhoods flooded despite not being a designated flood plain.

Jennifer Diascro rebuilt her house in North Arlington in 2007 and added a basement. She even added a sump pump at the time — but that failed under the onslaught of rain and rising water Monday morning.

Several feet of water poured in her finished basement, ruining the floor and the furniture. She expects to have to gut everything. 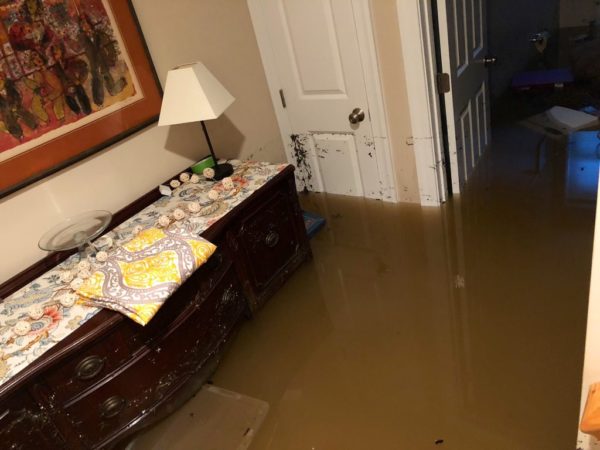 “We are very lucky, though — I know there are so many more Arlingtonians who have lost everything,” Diascro said in a social media message. “We have a mess in the basement and will have to replace and rebuild, but we can do that. Short of some sentimental losses, nearly everything is replaceable. I can’t imagine being wiped out.”

Like many others, Diascro also lost her HVAC and water heater in the flood. When she spoke with ARLnow on Tuesday she said she wasn’t sure if her homeowners insurance would cover any damages.

“The kids’ artwork on the wall was high enough to avoid damage though, so I didn’t have to have a meltdown over that at least,” she said.

Tom Sakell in North Arlington was working in his basement office when the floods hit.

“The basement just started filling,” he said in a social media message. “Before I knew it I saw my bagel floating next to me. And I thought, ‘Well there goes my breakfast’. Then I saw my phone floating next to it.”

His neighbor captured the river that soon flowed down his street.

He said his family and their two beagles fled to higher ground at a neighbor’s hilly yard. But Sakell couldn’t lift a 85-pound golden retriever named Austin he was babysitting that day over the fence. So he waded and swam through chest-high waters with the dog on a leash “like a horse” to safety.

In addition to his office and all of its computer equipment, Sakell said the flood destroyed the furniture in his finished basement and the hardwood floor, kitchen appliances, and cloth-covered furniture on the first floor.

For his family, this is an unwelcome reminder of another flood 14 years ago which also destroyed parts of his house.

Sakell said he applied for aid from FEMA that time and ultimately received a low interest $59,000 loan from the Small Business Administration to cover the cost of gutting the basement and installing the flood prevention drains in the yard. The SBA also required Virginia to allow him to buy flood insurance as part of the loan, and he’s kept the insurance policy every since.

Now he’s facing the same damages to his house, and another totaled car, but he feels they have “more of a fighting chance” thanks to the flood insurance. But with costs rising and repairs likely to stretch into spring 2020, Sakell says his family is considering leaving Arlington, taking advantage of rising home prices and interest from builders that have been tearing down older houses around the area.

Doug Clarke said he also waterproofed his home in Arlington Heights all those years ago.

“Our water proofing has basically handled every storm for a while, but I knew this one was different when water started pouring in the basement windows and running down the walls,” he said. The water only filled his home a few inches, but it was enough to ruin the finished basement and make him worry about mold in the walls.

“Basement floor probably needs replacing,” said Clarke, who estimates the damage will be a couple thousand dollars. He said in a social media message that for now, he’s trying to make the best of the situation by “staying in a hotel for A/C and pool and eating lobster rolls.”

Clarke’s homeowner’s insurance won’t cover the damage, and he’s not sure if he’ll qualify for FEMA aid if the county approves it.

He’s one of many residents fighting for any help they can get in paying for the mounting repair costs.

Athena Burkett on 14th Street N. said she heard flash floods forecasted for Thursday and worried her house could suffer more damage. She called her insurance company to purchase a flood policy Wednesday morning — only to be turned away.

“The representative told us we are in the ‘least likely to flood’ plain,” she said.

Ashley Hopko and Vernon Miles contributed to this report. Partial funding for this reporting provided by ARLnow’s Patreon community.