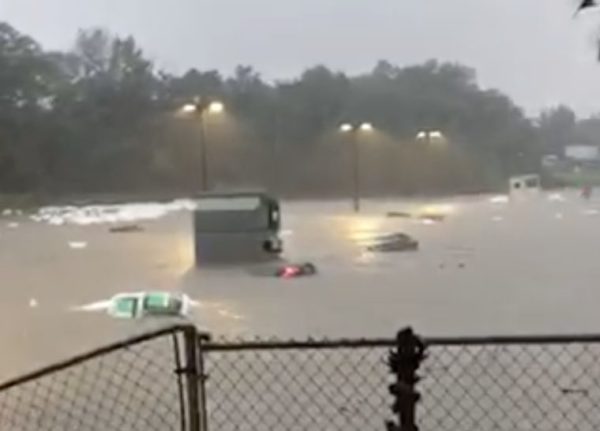 (Updated at 2 p.m.) Joint Base Myer-Henderson Hall is assessing damage to two dozen different buildings on the base caused by last month’s disastrous flooding, per a spokesperson.

“The base is still assessing the damage sustained during the flooding and is working on a report to be forwarded to our higher headquarters at the Army’s Installation Management Command,” said JBMHH Spokeswoman Leah Rubalcaba.

“There were a total of 26 facilities across our three bases of Fort Myer, Henderson Hall and Fort McNair that sustained water damage,” Rubalcaba told ARLnow in an email yesterday (Thursday.) “Military organizations do not have insurance, but are allotted an annual budget for operations and maintenance. Then, based on the final assessment and funding availability, additional funds will be forwarded to JBM-HH for repairs.”

She said the base has had to move events, like a recent job fair, into the basketball court because the community center is currently unusable.

“Somehow water got under the flooring and the floor buckled so nobody can walk on it,” she said.

Additionally, one bus from Marine Corps Base Quantico was parked in the lower lot by Henderson Hall — part of the headquarters of the U.S. Marine Corps — when rain flooded the area, damaging the bus along with four cars and a forklift.

The Henderson Hall parking lot, dubbed the “lower flood lot,” is prone to flooding because of the landscape’s natural drainage. But in her 15 years of working on the base, Rubalcaba said she’s never seen flooding as high as during the storm on July 8.

“We know we’re going to get a little bit of rain there. But usually like an inch,” she said. “That’s why we don’t build anything there. People know that’s what happens and they stay away from it.”

The unusually strong storm last month dumped 3-4 inches of water in an hour on Arlington. Roads, businesses and homes across the county were inundated with water and sewage with one stream swallowed whole by a broken pipe.

Countywide, the storm wrought an estimated $4 million in damages to publicly-owned property alone.

“We’re hoping to get some extra funding just to get everything repaired,” said Rubalcaba.