Press Club
Search
Around Town
DES workers examine why Lubber Run disappeared into a tree (Image courtesy of DES)
Near where Lubber Run disappeared, downed wires slope into the vegetation lining the stream banks
A picnic table and a trash bin were heaved onto a fallen tree in the river by the force of last week’s rainstorm
Picnic tables were carried by the flood waters, or swallowed by them, and now lay buried in silt and under broken tree limbs
Bits of broken bridges are beached on the banks of the stream
The county estimates that the storm wrought $4.1 million in damages to public property alone
A dog plays fetch with one of the broken tree branches strewn over the walking paths
Previous Image 1/7 Next Image

(Updated at 4:00 p.m.) Last week’s torrential rainstorm flooded thousands of homes and businesses — but something mysterious happened, too.

Earlier this week the stream appeared to be miraculously vanishing around a tree stump, according to a video posted online and on a local listserv. The water was a trickle of its usual flow when a resident shot the video, and the stream left a dry bed of round rocks exposed after the water appeared to disappear.

At first, when contacted by ARLnow, all the Department of Environmental Services (DES) could say for sure was that the stream hadn’t been “rerouted intentionally.”

Jessica Baxter, a DES spokeswoman initially it could take days to find the reason for the phenomenon as storm clean-up continues county-wide and crews work on the damage the storm wrought to public areas.

Raging flood waters washed away at least six pedestrian bridges in the county, including two over Lubber Run.

The department sent crews out Wednesday and Thursday to investigate the steam on a hunch the water could have somehow flowed into an underground pipe.

“There were a few trees that fell over the stream, including a stump that fell and possibly damaged our sewer main,” Baxter said on Thursday after crews visited the stream. “However, given the water entering the main, we are having challenges determining where the damage is.”

The crews then worked to divert the water — which had begun to swell again since its post-storm lull the resident captured in his video. Then the county crews used CCTV technology to inspect the pipe.

On Friday morning at 7 a.m., Baxter reached out to ARLnow to say crews had made a breakthrough.

“Crews got the tree stump removed from the area and we did observe a broken pipe,”she said. “We have our emergency contractor on-site to make repairs today.” 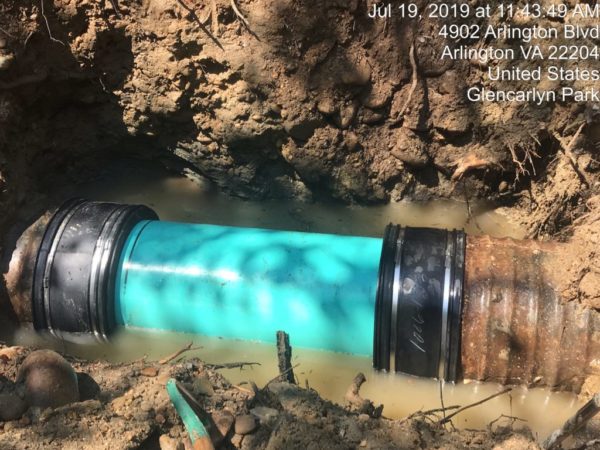 After the repairs to the pipe were completed later this afternoon, Baxter said crews are expected to return early next week for additional repair work, including inserting a liner into the pipe.

A 2011 assessment of all streams and their ability to prevent floods noted that many parts of Lubber Run were considered “stable,” but also noted that the stream had “poor utility elements” at the time.

Lubber Run is not just a feeder for Four Mile Run, it’s also a perfect habitat for underwater critters like crayfish and fly larvae, and snakes, snails, and worms make their home in the stream, which is lined by shaggy water elms.

ARLnow could not locate the mysterious tree dropping-off point after an hour of bushwhacking along the stream banks Tuesday afternoon. However, it was clear that the storm had left its mark in the area.

Bits of broken bridges were beached along the banks as far as Four Mile Run, and picnic tables were covered in silt after being swallowed by the rising water. The stream itself was brown with sediment and fallen tree limbs still littered the walking paths. A golden retriever could be seen jumping in and out of the stream with one of the thicker limbs in his mouth.