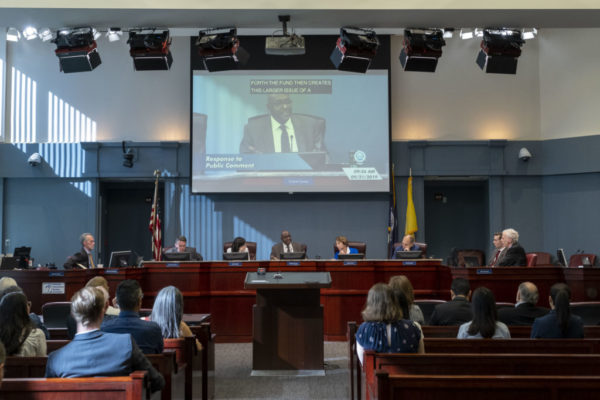 The Arlington County Board has unanimously approved several zoning changes that could incentivize developers to build more affordable housing units.

The changes, approved at the Saturday (November 16) County Board meeting, modify “bonus density maximums” for site plan projects and alter how the county defines low or moderate income to “provide greater flexibility in facilitating affordable housing.”

Density bonuses are an incentive land use tool regulated in the Arlington County Zoning Ordinance. Currently, density bonus maximums are capped at 25 percent above what is allowed in the zoning district. This means if a developer promises to build affordable housing units, community facilities, open spaces, or environmental amenities with their project, they’ll get up to 25 percent more space to work with.

After much debate — “my head hurts,” commented board member Erik Gutshall — the County Board voted to give itself the flexibility, within the heights specified for each zoning district, to consider added density above the 25 percent maximum on a case-by-case basis.

“Bonus density has allowed us to build hundreds of units of affordable housing across Arlington, and particularly in the transit-rich Metro corridors, without relying on County funding,” said County Board chair Christian Dorsey in a press release. “We believe this new flexibility will encourage developers to add more affordable homes in their projects.”

The revisions have received mixed feedback from developers and civic groups. Jack Spilsbury, the co-chair of the Ashton Heights Civic Association, said the elimination of density caps could “create more boxy buildings, and raise concerns about the preservation of neighborhood characteristics.”

In addition, the Board voted to allow higher income levels for affordable housing when considering new site plans. The County Board currently defines low-or-moderate income for renters as at or below 60 percent of the Area Median Income (AMI) — or about $51,000 per year — and at or below 80 percent AMI — or $68,000 per year — for home ownership.

“There is no question that affordable housing is something we are going to work diligently to solve,” said Gutshall during Saturday’s meeting. “But I believe in the long run here, we are going to get to those solutions easier and better by demonstrating to the community that we rely on the planning that it takes.”

The full press release about the bonus density changes is below, after the jump.

The County Board today moved to spur the creation of more affordable housing and meet public infrastructure and facility needs by revising bonus density maximums for site plan projects that would provide those public benefits. The Board also approved a redefinition of “low or moderate income” to allow the Board the flexibility to consider a higher affordability income range.

“In keeping with the goals of our Affordable Housing Master Plan and our Housing Arlington Initiative, the Board’s action today gives us flexibility to approve additional density above the 25 percent maximum we now allow,” Arlington County Board Chair Christian Dorsey said. “Bonus density has allowed us to build hundreds of units of affordable housing across Arlington, and particularly in the transit-rich Metro corridors, without relying on County funding. We believe this new flexibility will encourage developers to add more affordable homes in their projects.”

Bonuses are a land use tool that allow for additional density and height above the level indicated on the General Land Use Plan and applicable zoning district standards by County Board approval when the Board makes certain findings about the proposed development. The Board voted unanimously to amend the Zoning Ordinance to remove the current maximum combined bonus of 25 percent above that allowed in the respective zoning district for residential projects, or an additional 0.25 FAR for office projects in return for providing affordable housing and community facilities.

The Board voted instead to give itself the flexibility to consider more density, within the heights specified for each zoning district, for residential, commercial or hotel developments that propose to contribute affordable housing or community facilities. The Board also approved changes to the General Land Use Plan. […]

The Board also directed the County Manager to report to the Board on a general scope for a review of the Crystal City Sector Plan and C-O Crystal City zoning district regulations with regard to an increase in building height for individual major special exception site plan applications. His report will include specific details about trade-offs within the Planning Division work plan that would be required to execute such a scope.

More flexibility in defining what is low-to-moderate income

The County currently defines low-or-moderate-income as at or below 60 percent of Area Median Income (AMI) for rental housing and at or below 80 percent AMI for home ownership housing. Under the changes approved by the Board, the County would also be able to allow “other income levels as determined by the County Board upon consideration of the Affordable Housing Master Plan,” giving the Board flexibility to consider higher income levels when it considers approving additional density, or in limited circumstances, additional height.

Site plans are reviewed by the County and community to evaluate the proposed density, height and other site and building features, along with impacts that the proposed development may have on surrounding areas and facilities, and possible mitigation measures. Final decisions are made by the County Board, following public hearings before the Planning Commission and the Board. The County uses incentive zoning through the special exception site plan process to achieve County goals as expressed in the Comprehensive Plan, and other adopted plans and policies.