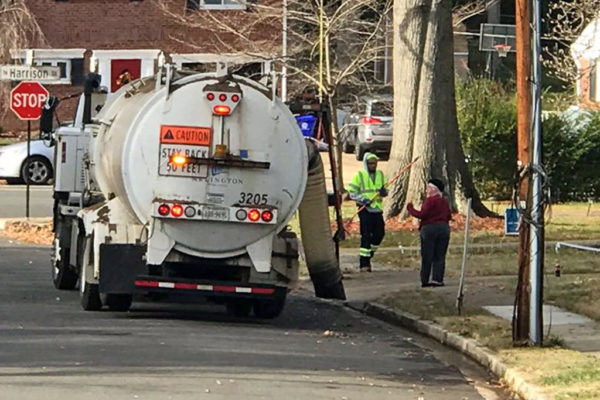 When given a daunting task, like vacuuming up the leaves in front of every home in the county, one might be tempted to try to rush through it as quickly as possible.

But for one of Arlington County’s leaf vacuum crews, helping out residents and getting the job done right is the priority.

On Friday, the day after Thanksgiving, a resident of the Rock Spring neighborhood near Yorktown High School posted on social media that a leaf collection crew was helping an elderly neighbor rake the leaves from her yard to the curb, where they could be vacuumed.

“Hats [off] to these guys,” she said, in a post that scored more than 100 likes on Twitter.

Hats of to these guys. Leaf collectors jumping out of their truck to help my elderly neighbor rake her leaves @ArlingtonDES @ArlingtonVA @ARLnowDOTcom pic.twitter.com/kd1SZPCpVc

The resident, Kathie K., tells ARLnow that there’s even more to the story.

“I went to get coffee… as I was pulling out I noticed someone in a work uniform raking a pile of leaves on my street. He gave me a big wave as I drove by,” she recounts. “When I pulled back into my cul-de-sac he and the truck had made their way around the circle and were now at the end.”

The crew of two were now working in the yard of two older sisters who live together, going above and beyond even what was seen in the photo, Kathie said. They were raking and talking to one of the sisters, as well as a father and son who were out raking and had brought the crew some water.

“The leaf collector that gave me a big wave was in their yard raking leaves. Not just on the curb, he was all the way to her front door raking leaves to the street. She was helping, they were all chatting,” she continued. “I took a picture because the guys were just being kind. They changed my day and I’m sure everyone else who has seen the picture. I thought it was a nice way to start the holiday season.”

Peter Golkin, a spokesman for the Arlington Dept. of Environmental Services, which handles leaf collection and other public works in the county, tells ARLnow that leaf collection crews are not required to help residents rake, but are often happy to help someone in need.

In this case, Golkin says driver Michael Hendricks, a permanent staffer in the Solid Waste Bureau and former Arlington Public Schools bus driver, and veteran seasonal crewperson Anthony Leftwich decided to help out — despite having a schedule to keep as they worked to wrap up the first leaf collection pass around the county by the end of the next day.

Hendricks “hopes someone would do the same for his own grandmother,” Golkin said.

With the second leaf collection pass now underway as of Monday, Hendricks offered some tips for residents.

“Try to keep cars away from the piles and don’t pile near cars to make it an easier reach for the vacuum hose,” he said. Also, Golkin noted, dry leaves can be a potential fire hazard when vehicles with hot catalytic converters park above them.

Leaf collection season is set to end on Dec. 18. That may seem like a relief to the crews, but Golkin said getting out into the residential neighborhoods and interacting with residents is usually a highlight of the season.

“The leaf crews especially enjoy sweeping through neighborhoods on Saturdays because kids are home from school and love watching the truck from a safe distance,” he said.