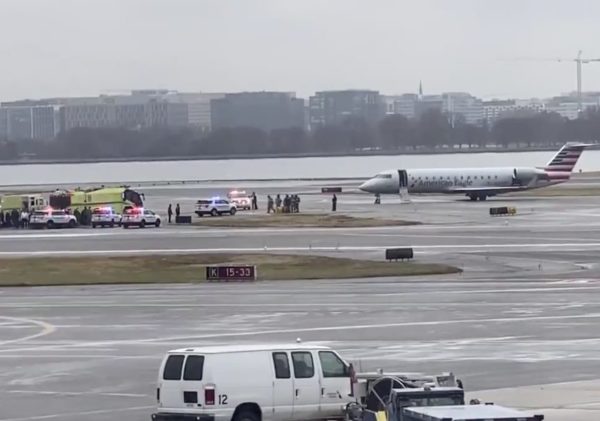 (Updated at 10:40 a.m.) Travelers flying in or out of Reagan National Airport should expect significant delays after an emergency landing and aircraft evacuation this morning.

Initial reports suggest that an American Airlines flight landed, declared an emergency and evacuated passengers on the tarmac after smoke filled the cabin. Emergency responders rushed to the scene but so far no significant injuries have been reported.

Dozens of flights are now delayed, waiting to take off or land from the busy airport.

“Due to… Aircraft Emergency, traffic is experiencing Gate Hold and Taxi delays between 46 minutes and 1 hour in length and increasing,” the Federal Aviation Administration said on its website as of 10:30 a.m. Shortly thereafter, the airport tweeted that the incident had been cleared and flights were resuming.

@bshepler At approximately 9:40 a.m. Mon, American flight 5082, CRJ-200 jet aircraft from Tallahassee, landed at DCA then declared an emergency due to reports of smoke in the cabin. The aircraft came to a stop and evacuated passengers onto the airfield via the aircraft’s stairs.

Flying to @boston is a test in my patience. First the weather and now some sort of emergency evacuation has closed the airport. Prayers all is OK! #WAS #DCA #delays @dca pic.twitter.com/qDxZiItS9E

Inbound to DCA holding, I expect diversions might start soon if they haven't already. pic.twitter.com/CuYMoKSwYO

An earlier incident involving an aircraft has been cleared and air traffic is resuming. Airlines are the best source of information on any changes to flight status. Thank you for your patience.