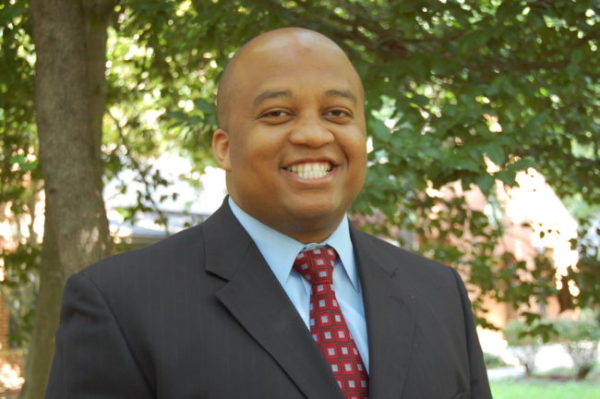 (Updated at 4:50 p.m.) Arlington County has hired Telly Tucker, head of economic development for the City of Danville, in southern Virginia, as the new Director of Arlington Economic Development.

The announcement follows the departure of a trio of top economic development officials from AED this year, including former director Victor Hoskins and interim director Alex Iams, both poached by Fairfax County, as well as Christina Winn, who left for Prince William County.

“My colleagues on the Board, and I look forward to working with him to continue building on our success in attracting and growing high-quality businesses, both large and small, to Arlington,” Dorsey said.

Tucker’s hire was the result  an extensive search, the county said, lauding his creativity and knack for building regional partnerships.

A biography of Tucker on the City of Danville’s website says he is a Lynchburg native, a James Madison University graduate and an accomplished pianist.

Prior to 2007, Tucker spent three years as an educator in Lynchburg City Schools teaching Spanish, and SOL remediation while also coaching football and basketball at Sanduksy Middle School.

Tucker is an accomplished pianist, Padewreski Medal Award recipient, and has served in music director roles in the cities of Lynchburg, Harrisonburg, Charlottesville, and Hampton, Virginia.

He is a Lynchburg native and a 1997 graduate of E.C. Glass High School and obtained his Bachelors of Business Administration in International Business and Spanish from James Madison University in 2004.

The full announcement from Arlington County, after the jump.

“Mr. Tucker has a track record of bringing job-creating businesses to Virginia communities,” Arlington County Board Chair Christian Dorsey said. “My colleagues on the Board, and I look forward to working with him to continue building on our success in attracting and growing high-quality businesses, both large and small, to Arlington.”

“Mr. Tucker brings a wealth of experience in economic development across a diverse range of communities throughout the Commonwealth,” said Schwartz. “I am thrilled that he will be bringing his talents to Arlington County at an important time in our history, and I look forward to working together to continue to strengthen our community and regional collaboration.”

Throughout his career, Tucker has approached economic development plans with an insightful and creative mindset. He will build on the momentum from Amazon’s move to ensure all of Arlington’s neighborhoods move forward together as one in an effort to attract even more businesses and support existing ones. Tucker has a track record of creating impactful regional partnerships and addressing the needs of the small business community, which will prove to be an invaluable strength in Arlington.

“Telly Tucker is widely known as one of the most collaborative and dedicated economic development leaders in Virginia,” said Stephen Moret, President and CEO of the Virginia Economic Development Partnership. “His experience working with communities across the Commonwealth as well as with our team at VEDP will serve him well in Arlington County. We look forward to supporting Telly, AED, and Arlington County during this exciting time for Arlington’s growth and development.”

“I am keenly interested in continuing to preserve and enhance Arlington’s competitiveness and sustainability through economic development,” said Mr. Tucker. “I want to work together to foster collaborative partnerships, real estate development and tourism, as well as establish strong relationships with businesses, clients, government officials, regional and local partners and the creative arts community.”