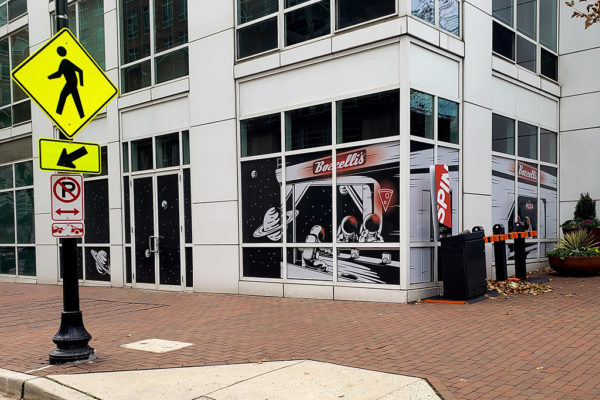 A space-themed pizza shop and deli in Crystal City plans to take off into a bigger space down the block.

Bozzelli’s, an “intergalactic” deli serving pizza and sandwiches, first opened at 2600 Crystal Drive in 2010. Nearly a decade later, the restaurant is moving to the opposite corner of the street where it will have room for an expansive dining room and bar.

“Honestly, we outgrew our shoebox of a store from day one. We never had room for more than three tabletops and six seats so our customers could never bank on getting a table,” said co-owner Mike Bozzelli.

Bozzelli also commented on the incoming arrival of Amazon’s new headquarters, noting it “factored into our decision making.”

“We welcome the advent of HQ2 and are extremely grateful for the community,” he said.

Bozzelli’s has four locations, including one in Springfield and another in D.C. Its menu features whole pizzas, including the “Mic Mac” topped with macaroni, mozzarella, cheddar, and peppers — along with sandwiches, salads, and desserts.