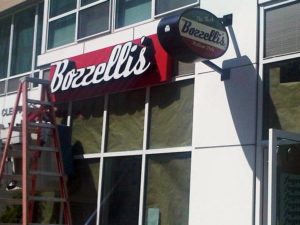 Yet another restaurant has opened in Crystal City.

Bozzelli’s Italian Deli served its first customers around 11:00 this morning. It will be open tonight until 8:00 tonight, an employee told us over the phone.

The new Bozzelli’s (the original is located in Springfield, Va.) is serving its “famous subs” and fresh-made salads today. Hand-tossed pizzas, soups and pasta will make it onto the menu within a couple of days, we’re told. An employee said they’re still working out the kinks.

“The ink on the Certificate of Occupancy is not even dry yet,” he said.

Bozzelli’s will be open seven days a week for lunch and dinner. According to the deli’s web site, it may eventually serve breakfast.

The opening of Bozzelli’s follows two other recent restaurant openings in Crystal City: Chick-fil-A and Jimmy John’s. The opening of another, much larger restaurant, Buffalo Wild Wings, is expected in about two weeks.

Update at 1:05 p.m. — Owner Mike Bozzelli, who was on hand for today’s soft opening, tells friend-of-the-blog Doug Wendt that he’s planning a formal grand opening event “in the near future.” Despite the cold and the rain, Wendt says some customers chose to eat outside on the tables that Bozzelli’s is sharing with the Starbucks next door.