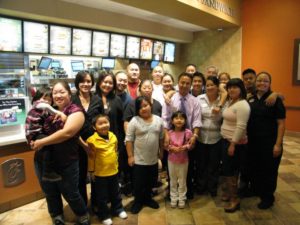 If Chick-fil-A wanted an owner committed to the company’s family values, they couldn’t have done much better than Natalie Yang.

The mother of four brought 30 family members in from various parts of the country for tomorrow’s opening of her Crystal City store. Of her nine brothers and sisters, eight made the trip.

The family members were joined in the store this afternoon by many of Yang’s 46 employees. Also among the crowd were nearly 30 corporate employees and fellow store owners, who were here to train employees and help out with the marketing.

Chick-fil-A’s marketing is primarily based around giving away lots and lots of food. Yang estimated that the store has given away at least 4,000 chicken sandwiches in the past couple of days, in addition to countless biscuits and chicken nuggets.

As the family members and employees sat around inside the shiny new store on Crystal Drive today, 110 campers were lounging around in the park across the street. They arrived with tents and cold weather gear early this morning to get in line for the First 100 promotion — a time-tested marketing gimmick which promises a year’s supply of Chick-fil-A meals for the first 100 people in line at store openings. 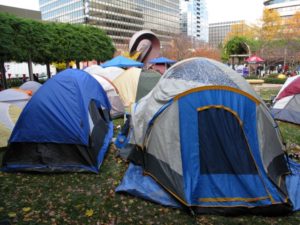 At least 30 people had to be turned away at the crack of dawn, after the queue reached capacity, according to a company spokesperson.

What motivated the campers to spend more than 24 hours in the cold in Crystal City, awaiting tomorrow’s 6:00 a.m. opening?

“My husband used all the Chick-fil-A coupons that I had from last time, so I had to come and get more,” said Anna Matson, a stay-at-home mom from Lynchburg, Va. Matson was joined by her 17 month old son Judah, who has already attended five Chick-fil-A openings (if you count the two or three while Matson was pregnant with him).

Matson said the openings are also fun, with music, games, free food and, of course, the guy in a cow costume.

Towson University student Femi Gbangblasa, a grand opening first-timer, said he was also here for the free food. He and his six friends were trying to stay warm while chatting around one of the park’s picnic benches. Gbangblasa said he has been spending most of his time studying, but has been enjoying the experience, for the most part. Would he do it again?

“I would do it again in warmer weather, probably,” he said.

Read more →
More Stories
If You Could Improve One Thing About Arlington…What’s Going on With Yorktown Bistro?