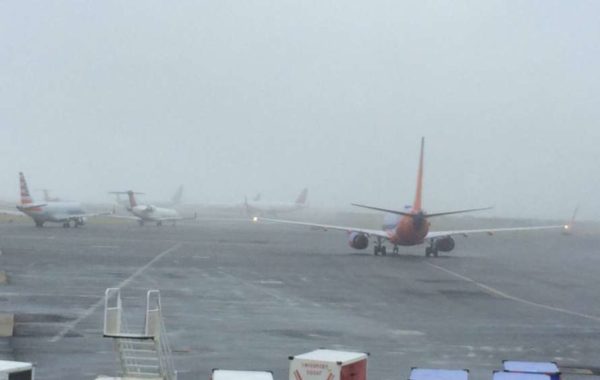 (Updated at 3:10 p.m.) The worst of today’s fog is starting to lift after an earlier Dense Fog Advisory that was in effect for Arlington and surrounding areas

The fog has prompted delays at Reagan National Airport.

“Due to Low Ceilings, traffic is experiencing Gate Hold and Taxi delays between 16 minutes and 30 minutes in length and increasing,” said the FAA’s flight delay maps.

More of the advisory, from the National Weather Service:

…DENSE FOG ADVISORY REMAINS IN EFFECT UNTIL 4 PM EST THIS AFTERNOON… * WHAT…VISIBILITY ONE QUARTER MILE OR LESS IN DENSE FOG. * WHERE…PORTIONS OF THE DISTRICT OF COLUMBIA, CENTRAL, NORTH CENTRAL, NORTHERN AND SOUTHERN MARYLAND AND CENTRAL AND NORTHERN VIRGINIA. * WHEN…UNTIL 4 PM EST THIS AFTERNOON. * IMPACTS…HAZARDOUS DRIVING CONDITIONS DUE TO LOW VISIBILITY. PRECAUTIONARY/PREPAREDNESS ACTIONS… IF DRIVING, SLOW DOWN, USE YOUR HEADLIGHTS, AND LEAVE PLENTY OF DISTANCE AHEAD OF YOU. &&

Fog has continued to break up, so the Dense Fog Advisory has been cancelled for the remainder of the area. However, a few patches of dense fog remain, so continue to use caution while driving this evening.

On Twitter, Reagan National Airport tweeted earlier this afternoon that the fog completely hid its tower, as seen from nearby Crystal City.

If anyone has seen our tower, please let us know. 😱🌫 pic.twitter.com/tbd3caJNmM

END_OF_DOCUMENT_TOKEN_TO_BE_REPLACED

More Stories
The Right Note: What’s Ahead in 2020?County Pushing Back Against Stream Restoration “Myths”