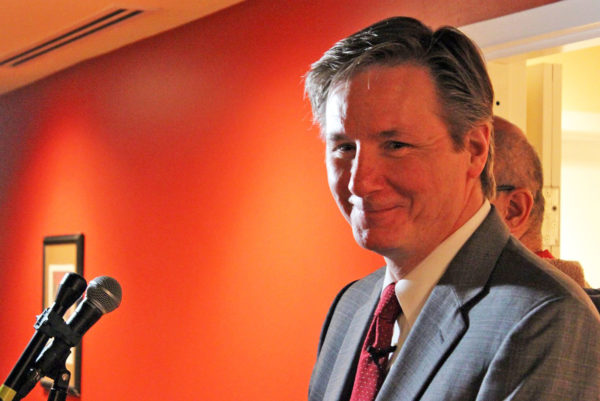 In a letter to friends and colleagues, LeValley cited ongoing health concerns as the reason he’s stepping down. He plans to remain active in AIM, which holds media training classes while operating Arlington’s public access cable TV channel and local radio station WERA 96.7, as a member of the organization.

“I’ll continue to be a strong supporter of AIM and WERA,” he wrote. “I’ll keep my membership active and I’ll come around to enjoy the parties and the [Friends of AIM] events — it will be fun (and strange) to not have to be the host.”

While LeValley will be stepping away from duties as executive director, he expressed a strong belief that the organization is being left in good hands with its board of directors and staff.

My tenure at AIM began more than 27 years ago when the board of directors took a chance on an eager, displaced Midwesterner who was only 35 years old and looked seventeen. I knew when I began that I was going to like the job. A great staff, tremendously talented producers, dedicated volunteers-what was not to like? But I didn’t know how much I would grow to love it and all the people that make up America’s Number One Community Media Organization.

We’ve been lucky for all the years that I’ve been the executive director to have benefitted from dozens of outstanding board leaders and members. Working with them to chart a path for AIM has been great fun as well as very rewarding. We’re extremely fortunate right now to have one of the best boards we’ve ever had. My leaving is made easier by the knowledge that they are here to keep the ship sailing in the right direction. Though the challenges are significant, I’m confident that they’re up to the task.

The challenges referenced in the letter include continued reductions in county funding.

LeValley said he plans to retire on Feb. 7.