Previously: As part of a pre-spring cleaning, I went Marie Kondo on the non-refrigerated part of my beer cellar, exorcising demons of my Gotta Have It past. Little joy was sparked.

I wish I had any duplicates of the beers I opened a couple weeks ago in my beer fridge to do a true 1:1 comparison. I say this because I had as good a hit rate on my beer fridge raid as I had a bad one a few weeks back. I think I just happened to have picked out a few beers that would’ve aged well regardless. 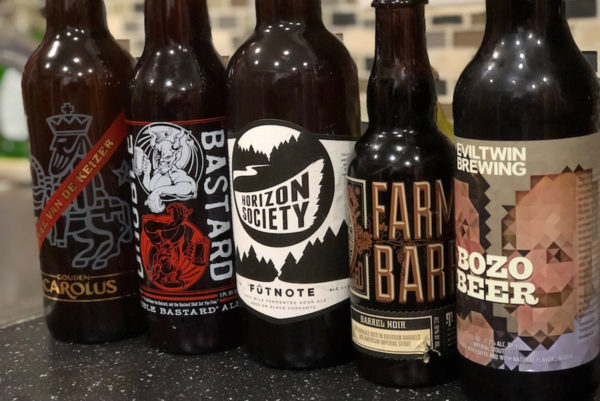 Since I had greater success with this round of tasting, I’ll go into notes on each beer running from left to right in this week’s picture:

Poured with shocking head retention and lacing for a seven-year old beer. Time was, Stone was all about the aggressive bitterness, but the real secret was how well-thought the grists were and Double Bastard may be among the best examples of this. A tick oxidized on the nose but with sweet golden raisin tones.

Bitterness is mostly faded, playing along the edges of a palate of boozy maple syrup and cocoa flavors. 12-18 months ago, this would have been perfect. As it is, I have another ’13 and a ’15 that I’ll be enjoying soon.

Closest thing to a clunker in the bunch. Currant was all but gone; a little oxidized; completely flat but the cork was set kind of odd so it may have been more to do with that than anything else. Still not that bad an old Sour, all things considered.

50% Bourbon BA Belgian-style Dark Ale/50% Imperial Stout. The best beer I opened throughout this little adventure: a tinge of oxidation with its age, but that age had also balanced the bourbon notes and the Belgian yeast spiciness without losing any of its component flavors. An absolute gem, and a great example of the rare beer that truly benefits from maturation.

When I recovered, I found the spices quite alive and well, along with a hint of the hazelnut and most of all, the molasses and sugary notes. It was a bit much for my tastes, but in a bottle share I’d be able to have just enough for a laugh and I can see where some folks might really get into it.

I still advocate drinking those beer purchases rather than holding onto them, but this run was a pleasant surprise and a nice reminder that when you do come across the rare beer that ages well, they can be a true joy when caught at the right moment.

To see what’s on tap at Arrowine’s Draft Station in real-time, follow us on Untappd or check out the draft board on Arrowine.com.