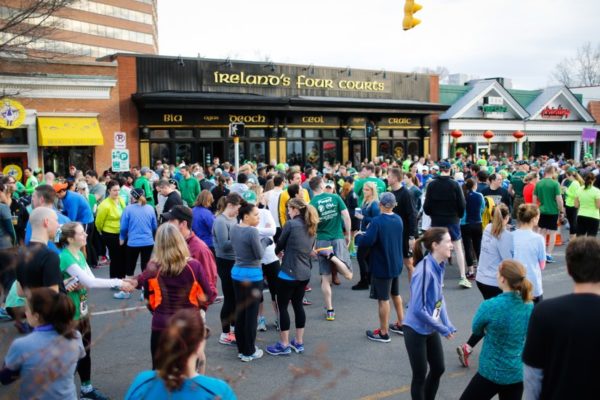 A Courthouse pub is again lending its name to an annual St. Patrick’s Day-themed race.

New this year, the race is now a part of the St. Pat’s Run Fest, a two-day event that offers three races, including a 5K and 10K in the District on Sunday, March 15.

“Join us for an entire weekend of celebration and running as we combine two of our favorite iconic events,” wrote organizer Pacers Running. “The Four Courts Four Miler (Arlington) and the St. Pat’s Run (DC) merge across our community into one Run Fest. A region-spanning, shamrock-shaking, running event with adult beverages, Double Challenge and Triple Challenge finisher custom medals for our multi-event competitors, post-race fun and the most beautiful views in Arlington and DC.”

The registration fee for the Four Courts Four Miler is $48. Those who register can pick up their bibs from Pacers Clarendon and Pacers 14th Street beginning March 2, up until the morning of the race.

The Four Courts Four Miler course will take runners down Wilson Blvd into Rosslyn, then down Route 110, and back. It famously includes a steep climb at the end and a leprechaun that passes and heckles runners — for a good cause.

END_OF_DOCUMENT_TOKEN_TO_BE_REPLACED

More Stories
New Streets Coming With New Marriott Redevelopment in RosslynStatutes of Liberty: Like the FAFSA, But So Much Worse — The New Public Charge Requirement