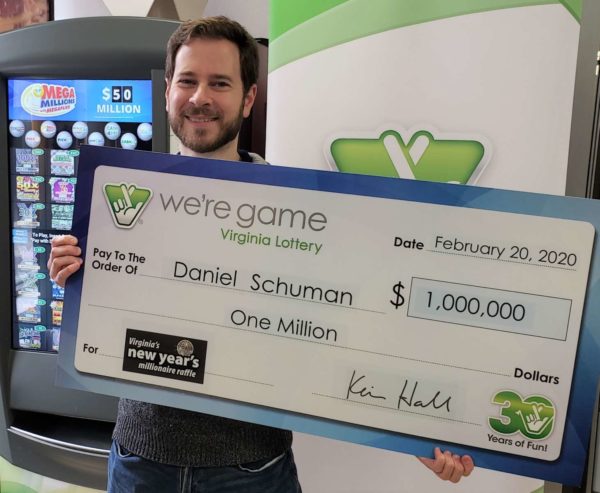 An Arlington attorney who says he never plays the lottery has finally stepped forward to claim a $1 million lottery prize he won on New Year’s Day.

Daniel Schuman’s wife bought him the winning New Year’s Millionaire Raffle ticket from the 7-Eleven store at 4223 Fairfax Drive in Ballston. It was one of three $1 million tickets sold statewide.

“It was shocking,” Schuman said about realizing he won. He claimed his check on Feb. 20 but has “no immediate plans for the winnings,” according to the Virginia Lottery. The store received $10,000 for selling the winning ticket.

More from a lottery press release:

Daniel Schuman is not a lottery player. In fact, the Arlington man said he never plays. But as it turns out, his wife bought him a ticket for Virginia’s New Year’s Millionaire Raffle, and that ticket ended up winning $1 million.

“We saw that the number matched, and we checked again,” he told Virginia Lottery officials. “It was shocking. It’s like, this isn’t what we expected!”

The winning ticket was bought at the 7-Eleven at 4223 North Fairfax Drive in Arlington. That ticket, #149613, was one of three top prize winners in the New Year’s Day drawing.

On February 20, he went to the store to receive his check from the Virginia Lottery. The store received $10,000 for selling the winning ticket.

Mr. Schuman, who is an attorney, said he has no immediate plans for the winnings.

The other two top prize tickets in the January 1 drawing were bought in Portsmouth and Chesapeake. Five additional tickets won $100,000 each. Those tickets were bought in Arlington, Fredericksburg, Midlothian, Narrows and Winchester. An additional 500 tickets each won $500.