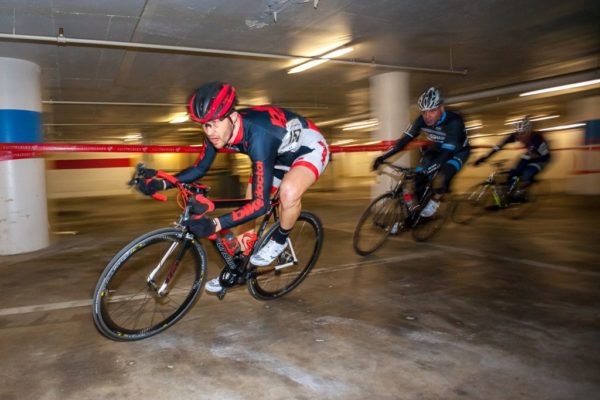 (Updated at 5:45 p.m.) A series of underground bicycle races is coming back to Crystal City next month.

Throughout the month, several races will weave through the parking garage at 201 12th Street S. The sixth annual event series, organized by the Crystal City Business Improvement District, is billed as “the area’s only underground bike race.”

The race hosts warned on the registration website that racing inside with low ceilings and concrete pillars can take a few minutes to get used to.

“This is a training race,” said the website. “Our main goal is to get everyone out riding in a fun and competitive setting.”

Spectators will be able to catch the races on the sidelines and hang out at a lounge area, which will provide a viewing area and feature happy hour drinks and bites from Acme Pie.

“Friends, family, and those too timid for the saddle can always catch the excitement from the comfort of the sidelines while enjoying a beverage from the event’s pop-up bar,” the BID noted.

Each day of racing will have three categories: a beginner race, a women’s cup, and a cup open to men and women aimed at racers who already have some experience. Each race is scheduled to last 35 minutes with a limit of 50 participants. The fee to enter is $20.

The final will have a different setup. In addition to the beginners’ race, the March 31 race will feature a relay race, an “anything goes” race, and a fixed-gear bike race. For the anything-goes race, the only limit is that the vehicle can’t be motorized.

If you’re wondering what racing underground feels like, in 2017 a participant rode with a GoPro.

END_OF_DOCUMENT_TOKEN_TO_BE_REPLACED

More Stories
Legal Insider: Religious Accommodation in the WorkplaceProgressive Voice: Get Off the Sidelines, Weigh In On Our Next President