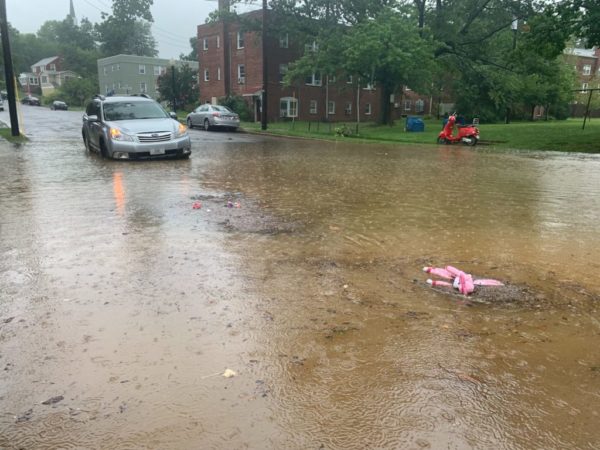 After last summer’s devastating flash flooding, Arlington is ready to move forward with a new set of changes to try to prevent the same level of flood damage.

Staff said at Tuesday’s Arlington County Board meeting that the trend of increasing intensity and frequency of the storms has forced the county to take flood resilience more seriously. Shorter-term solutions that are in progress include new flood sensors, included in this year’s budget, and plans to change regulations for new developments.

The most immediate plan is $129,000 for a flood sensor pilot program. These would include sensors at two key intersections that indicate hazardous levels of water. Staff noted that it only takes six inches of water to sweep someone off their feet and two feet of water to disable a vehicle, meaning signs with warnings about depth could help those in flooding situations make informed choices.

The pilot also includes dozens of residential sensors that staff said could be installed in some of the most vulnerable homes, like smoke detectors.

“Providing that individual early warning and notification for a house is tough,” staff said. “There are so many variables. We recommended that [Arlington] look at some individual flood sensors for residential use.”

“If something happens at 2 a.m. we want people to get that info,” staff said.

County Board members expressed enthusiasm for the proposed sensors, with Matt de Ferranti saying it was an example of citizen input accelerating the county’s plans.

The staff recommendation also calls for approximately $150-200 million in investment in the 10-year Capital Improvement Plan (CIP), including capital maintenance, stream and water quality work, and expansion of the stormwater system’s capacity. The latter, staff noted, was the majority of the investment.

An open house for the county’s stormwater plan is scheduled for Thursday, March 26 from 6-8 p.m., at Washington-Liberty High School (1301 N. Stafford Street).

In his report to the Board, County Manager Mark Schwartz said the flooding last year is still causing lingering problems for the county’s trails, mainly due to significant erosion. Schwartz noted that many of the nature trails through Glencarlyn and Lubber Run may look safe but are still hazardous. He added an assessment is currently underway regarding the health of the local trails.

The county’s latest CIP, which is likely to include stormwater capacity upgrades, will be proposed by Schwartz in May and adopted by the County Board in July.