Rumor has it the Febrey-Lothrop House (6407 Wilson Blvd) — the home on a huge lot at the corner of Wilson Blvd and N. McKinley Road — could be headed to market soon.

The 9+ acre parcel, which includes the main house and two other side buildings, is one of the last large pieces of contiguous property of its kind in space-constrained Arlington.

Officials have recently been made aware that the property was for sale, according to Arlington County spokeswoman Jennifer Smith. The property is listed as a “generational” site in the county’s Parks Master Plan (page 162) — a place that could be potentially acquired and turned into a public park, although it’s just a block from Upton Hill Regional Park.

The county, with its need for land for schools and public facilities, might also consider it for other uses.

The house sits removed from the main road, near Seven Corners, on a long driveway. It’s an isolated, wooded retreat even though it’s just two miles down Wilson Blvd from the high rises of Ballston. The exterior of the house is in a disheveled state. Windows are broken, paint is peeling away from the side of the building, foxes drink from rainwater in the clogged pool. 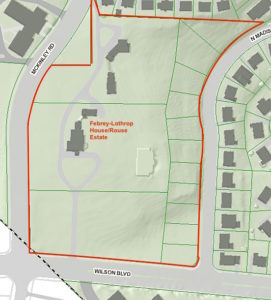 The property’s financial value is in the large tract of mostly undeveloped land.

“In terms of development potential, the price (of around $30 million) is reasonable, as the land is already zoned for single-family homes and/or townhouses development,” local activist Suzanne Sundberg, who supports converting the property into a park and potentially a school, told ARLnow. “With so little undeveloped land in the county that comes on the market once in a blue moon, we cannot afford to be picky about location. Land is land.”

Sundberg noted that, should the property be developed as housing, it could stress already-crowded local schools.

“With the proposed upzoning of single-family neighborhoods, the property could hold 2, 3 or even 4 times as much housing as the current estimate [of] 67 townhouses,” she wrote.

The property also holds some sentimental value in its long and curious history of opulence.

“The expansive size of the property… with a number of domestic and agricultural outbuildings surrounded by mid-twentieth-century development, adds to the grandeur of the main dwelling,” an architectural survey of Arlington prepared in 2009 said.

The earliest records of the property show a house being built at the then-rural property in 1855. The original building, called Fairmount, no longer exists but later additions to the property were incorporated into the new structures.

The property was purchased by Alvin Lothrop — one of the founders of the Woodward and Lothrop department stores chain — in 1898. By 1907 the Fairmount building was destroyed and replaced with the colonial revival style home, inspired by George Washington’s Mount Vernon.

Lothrop died in 1912, and the family maintained the estate through the Second World War, when it was reportedly leased to Howard Hughes, according to Arlington Magazine. Among the guests entertained at the house were movie star Jane Russell.

After the war, the home was purchased by local real estate developer, socialite and expert horseman Randy Rouse. When Rouse purchased the property, most of the acreage was broken up to form the Dominion Hills neighborhood, though he kept the house and the surrounding property.

Rouse was briefly married to The Honeymooners star Audrey Meadows. The stress of her commute from Arlington up to New York on Fridays reportedly took a toll on their short-lived marriage, according to local historian Charlie Clark.

Rouse died in 2017 at the age of 100. The business Randolph Rouse Interprises is still listed as operating out of the building.