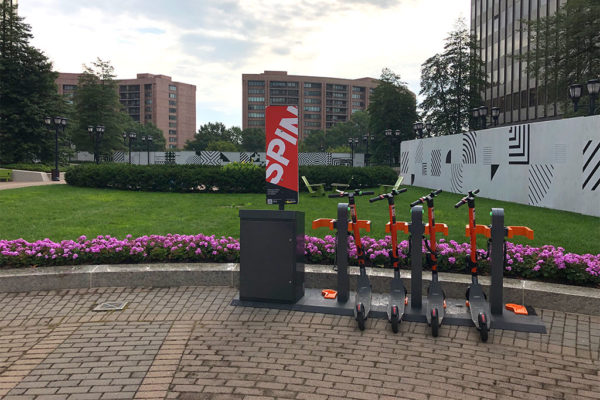 (Updated at 5:15 p.m.) Five e-scooter firms won approval to operate in Arlington County, but others currently operating in Arlington were told until they have until this Sunday to clear out.

Lyft and Spin, which as of Tuesday still have scooters on Arlington streets, had their permit applications denied, Arlington Department of Environmental Services spokesman Eric Balliet said in an email.

Last fall, Spin was one of the few scooter companies leading the charge in Arlington on docks and incentives for proper parking for scooters.

E-scooter and e-bike company Jump also applied to offer e-bikes in Arlington but was denied. No other e-bike operators, including Lime which had previously deployed e-bikes to local sidewalks, were approved for operation. Lime did not apply for an e-bike permit, Balliet said.

Staff reviewed the applications and, based on scoring criteria, denied a permit to the following companies:

While Jump’s e-bike permit was denied, the company was one of the five approved to operate scooters in Arlington. The other four are Bird, Jump, Lime, Razor and Skip.

Arlington isn’t alone in slimming down the number of companies operating scooters. In D.C. the number of scooter operators was cut from eight to four: Jump, Lyft, Skip and Spin. This means only Skip and Jump scooters can be ridden in both D.C. and Arlington.

For the scooter operators told to pack up, Balliet said they have until Sunday, March 15, to remove their devices from Arlington.