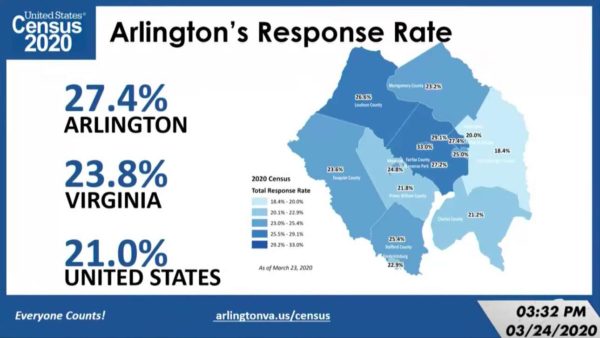 The upshot of most Arlingtonians being confined to their homes is that Arlington is seeing fairly high rates of responses to the 2020 census.

County Manager Mark Schwartz said at Tuesday’s County Board meeting that the Arlington is already seeing higher rates of people turning in census forms than at this time in the 2010 census. The rate currently sits at 27.4%.

“We went back and looked at 2010 and we’re doing better than we were doing in 2010,” Schwartz said. “I think part of that is because people are at home… It’s really good for where we are in the process.”

County officials are pushing census participation, the upshot of which is more representation in Congress and more federal assistance. County Board member Katie Cristol said that respondents should remember to “count their babies” in the census, noting that populations under five-years-old were the most underreported demographics in the last census.

Households can respond to the census online, by phone, or by mail until Aug. 14. Households should have recently received census mailers.

Schwartz said county officials are still hoping to set up mobile census assistances stations outside places like grocery stores and community centers once the pandemic concerns have died down.

Many of the traditional methods the county uses to encourage people to fill out the census, like pop-ups, have been canceled. The county government is still finding other ways to promote responding to the census.

“We’re including information about the census with food distribution that’s going on,” Schwartz said. “Several hundred tote bags have been given to AFAC as a way of emphasizing that.”

If you were curious about whether County Manager Mark Schwartz has a poem for the moment, you won’t be disappointed. He recited the following self-written verse at the meeting.

Covid has us all feeling frustration

What a great time to ensure our county’s enumeration

Take a minute or two to complete your census form

Perfect to do while social distancing is the norm

Just go to census.gov and complete all the questions

So Arlington can get our full representation

Schwartz’s full presentation is below.