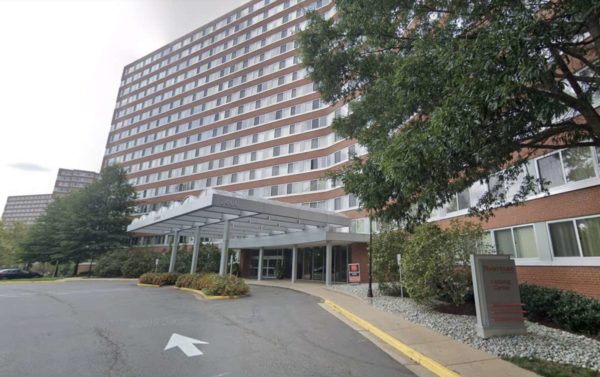 An Arlington man is facing a number of charges after police say he drunkenly charged at officers in an apartment hallway while half naked.

Police were dispatched to one of the RiverHouse apartment buildings in Pentagon City around 2 p.m. Monday, after a caller said someone they knew was intoxicated and “acting disorderly” in an apartment.

“Upon arrival, the subject charged at officers and remained combative,” Arlington County Police spokeswoman Ashley Savage tells ARLnow. “Following the deployment of pepper spray and a taser, the subject was taken into custody. He has been transported to an area hospital for evaluation. No officers were injured.”

An ACPD crime report add that the 40-year-old man was “partially undressed” and that the taser was used after the pepper spray “had little effect on the suspect.” He now faces charges of Indecent Exposure, Obstruction of Justice and Drunk in Public.

INDECENT EXPOSURE, 2020-03300111, 1400 block of S. Joyce Street. At approximately 2:04 p.m. on March 30, police were dispatched to the report of trouble unknown. The reporting party advised dispatch that the known male suspect was allegedly intoxicated and acting disorderly inside a residence. Arriving officers located the partially undressed suspect in the hallway of the apartment building. The suspect repeatedly ignored the lawful commands of officers to stop and get on the ground and continued to act aggressively and advance towards them. An officer deployed OC Spray, which had little effect on the suspect and he continued to advance towards officers. A second officer then deployed their taser, enabling the officers to place the combative suspect into custody. The suspect was transported to an area hospital for medical treatment. Kenneth Archer, 40, of Arlington, Va., was charged with Drunk in Public, Obstruction of Justice and Indecent Exposure.