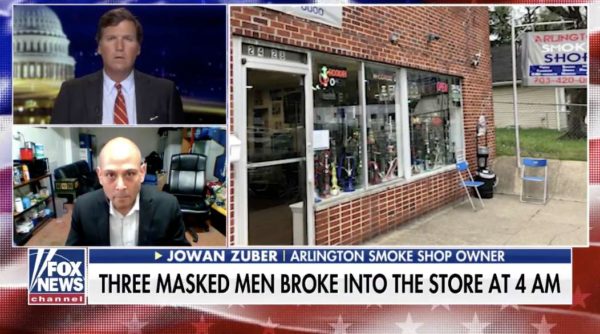 The owner of a local store went on Fox News’ Tucker Carlson Tonight last night to discuss the arrest of a store employee for shooting a would-be robber.

Jowan Zuber, owner of Arlington Smoke Shop in the Green Valley neighborhood, said 33-year-old Hamzeh Abushariah was sleeping in the store’s back office when he was awoken by loud noises. He encountered three masked suspects breaking in and fired three shots to scare them off, Zuber claimed.

One of the suspects, a boy under 18 years of age, was struck and suffered serious but non-life-threatening injuries, police said.

To Zuber’s surprise, police and the Commonwealth’s Attorney decided to level felony charges against Abushariah that could land him in prison for upwards of two decades, if convicted. Abushariah was denied bond, Zuber said, leading to concerns for his health while confined during the coronavirus epidemic.

“We thought we’re in the right. Three masked men at 4:30 on a Sunday morning,” Zuber told Carlson. “This is very sad for America today, as American citizens practicing the Second Amendment to protect the store and the lives.”

Zuber claimed that police asked Abushariah, “why didn’t you run out the back door?”

“This [tells] the criminals out there, hey we can rob stuff, kill people, hurt people, and guess what — people have to run out the back door,” Zuber said. “This is mind boggling.”

“There’s evidence we are not at liberty to share that support the charges, the decision was not made lightly,” the office said on Twitter.

1/5 As part of our office commitment to public transparency, we’d like to offer a few comments regarding the incident and arrest described in the article below. cc @ARLnowDOTcom https://t.co/gj1lTSIpRo

3/5 Second, public comments risk impeding the rights of the accused who, while accused, is entitled to the presumption of innocence. In other words, we don’t prematurely discuss the facts of a case because we are obligated to safeguard the accused’s due process rights.

5/5 In short, we ask there not be a rush to judgment on what is very much on our part and on the part of the Police a live case.

Update at noon — The Arlington County Republican Committee has weighed in on the controversy via Twitter, calling for charges against Abushariah to be dropped.