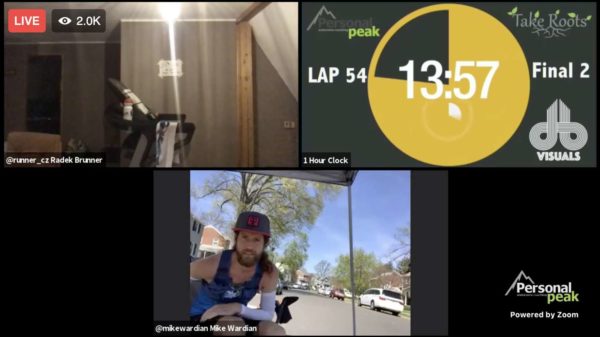 Michael Wardian was among the participants in the “Backyard Quarantine Ultra,” a virtual race conducted via Zoom and social media. The race kicked off Saturday and attracted worldwide attention for its unique format — it challenged runners to run about 4.2 miles on the hour, each hour, and broadcast it via the video conferencing app.

What started with 2,300 runners from 50 countries quickly became a battle of attrition. By day two, it was down to just two: Wardian, 45, and Czech runner Radek Brunner.

A TV crew from WJLA showed up to film the spectacle as Wardian repeatedly ran the same loop around the Arlington Forest neighborhood, where he lives, to the cheers of neighbors.

With the round-the-clock race dragging into its third night and surpassing the 250 mile mark, the audience grew.

Finally, at 11 p.m. last night, Brunner — who was running inside on a treadmill — made a mistake: not starting in time when the horn sounded. He was disqualified and Wardian crowned the champion after he completed his loops. He had competed for 63 hours, had not slept, and ended up running a total of 262.52 miles.

“It was a real honor and privilege to be a part of something beyond my imagination,” said an exhausted Wardian, who came a few hours shy of a world record after the race ended.

Congratulations flowed in from all corners of the globe, including from his hometown.