Sponsored by Monday Properties and written by ARLnow,  Startup Monday is a weekly column that profiles Arlington-based startups and their founders, plus other local technology happenings. Monday Properties remains firmly committed to the health, safety and well-being of its employees, tenants and community. This week, Monday Properties is proudly featuring 1000 and 1100 Wilson (The Rosslyn Towers).

One area of the economy that is being disrupted by the coronavirus pandemic, among many, is a group used to being the ones doing the disrupting: startups.

As COVID-19 results in widespread economic devastation, startup founders find themselves having gone almost overnight from a world with abundant funding and plenty of deep-pocketed potential customers, to one in which funding is likely to be scarce and customers — companies and individuals alike — are looking for ways to cut costs, not add new expenses. 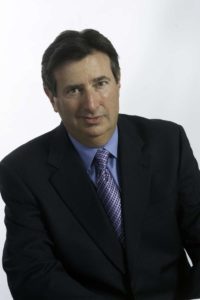 Jonathan Aberman, Dean of the School of Business and Technology at Marymount University in Arlington and a long-time participant in the D.C. area startup ecosystem, said that tough times like these often result in a starker contrast between winners and losers.

“The first thing you have to understand is that not every company is going to be affected the same way, because some companies are going to benefit really well from the short term,” he said, citing certain healthcare startups as one example. “In the longer term the economy is going to be changed forever by COVID-19 and the aftermath, in ways we can’t really predict.”

“Uniformly, right now, every business is trying to figure out what the future looks like,” he said. “COVID-19 is such an enormous change agent for how our economy and our society functions.”

One major differentiation factor between winners and losers, according to Aberman, will be product/market fit: whether a given company offers something for which there is strong demand in the marketplace. Whereas prior to the pandemic founders with a bright idea and confidence-inspiring credentials could get funding for the latest Uber-for-something app before actual customers showed up, the new environment will favor scrappy founders who go out and build something people really want.

“With venture capital for the past few years, startups without product/market fit could raise money,” Aberman said. “But if you don’t have a product that is really attractive right now, if you aren’t in a sector of the economy that’s really hot right now, and you don’t have the possibility of being hot in the near term, you have to ask yourself: am I in a war of attrition?”

Startups with few customers and poor funding prospects are ill-fitted for such a world, where only the strong and well-capitalized survive. On the other hand, those making something that’s in need — robots and artificial intelligence that can help do work usually done by humans, for instance, or other products and services compatible with social distancing — should do fine.

“It’s appropriate to use the the ‘D’ word — depression,” for the current economic climate, Aberman said. “I think it will end when there’s a vaccine.”

Entrepreneurs who are in it for the long haul — those who grit it out and are less concerned about getting rich as they are building something great — will find lots of opportunity as the economy rebounds. And those who jump in now rather than waiting for the coast to be clear will have a valuable head start and a leg up when it comes to seeking funding, according to Aberman.

Additionally, the D.C. area and its startup ecosystem — which is weighted toward less sexy but more reliably lucrative categories like cybersecurity, which get less attention than the latest buzzy consumer startup — is relatively well-positioned going forward, says Aberman.

“We didn’t really participate in all the frothiness of the national venture capital market,” he said. “We never really over-indexed to ‘Facebook-for-cats.'”

The local startup scene “is not just around government,” said Aberman. “It’s around a lot of established industries that will continue to have money.”