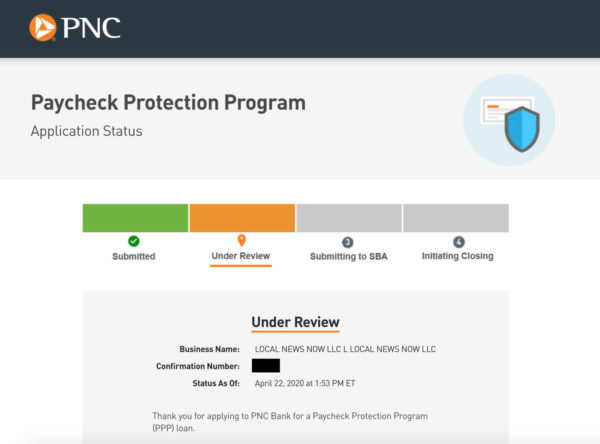 On March 25, the owner of ARLnow’s parent company — which also owns ALXnow, Tysons Reporter and Reston Now — sent an email to the manager of our local bank branch.

“My understanding is that banks will be offering some form of SBA loan for payroll support, with a provision for the payroll costs to be forgiven after a few months,” said the email, sent two days before the CARES Act was signed into law. “That is something we both very much need and want. Can you put me in line to apply for it when the bill passes and we know what the terms are?”

Four weeks later, all $349 billion of the federal government’s Paycheck Protection Program is spoken for and ARLnow’s application is still listed opaquely as “under review” by our bank, PNC.

We’re not alone, millions of small business — including Ben’s Chili Bowl — are facing the same reality. And while the program is likely to be replenished by Congress soon, those left behind still have the uncertainty of not knowing whether we’ll get the loans this time around, and whether it will be too late to save the business as it exists now, even if we eventually do qualify.

Thanks to the loyalty of our long-time advertisers and the generous contributions of our readers, ARLnow will weather this storm in one form or another. But a PPP loan would make a big difference in our ability to retain our workforce and our level of original reporting going forward.

For those interested in the nitty gritty, the following is an account of our experience with PPP. Hopefully it can be instructive for those trying to understand how it worked (and did not work), or cathartic for small business owners in the same boat.

We emailed the person we were told was our main point of contact at PNC’s main Arlington office, on the day that the Small Business Administration was slated to open up its PPP loan processing window.

“It sounds like banks can start lending under the Payroll Protection Program in the CARES Act.” we asked. “How can we move forward with that?”

Our PNC contact responded promptly, letting us know that “like other financial institutions, we are reviewing the additional guidance from the U.S. Treasury and waiting for the final guidelines and details from the Small Business Administration.” This would be the last time we would hear from a human at PNC until a check-in email on April 16, the day the program ran out of money.

Applying with PNC made the most sense for us. We’ve banked there for the past decade as a business, and our owner has banked there personally since he was a teenager in the 1990s. Plus myriad articles on the subject of PPP said that business owners would have the most luck applying with their existing bank, which is more familiar with their financial history.

The fact that we also have a lending relationship with PNC, in the form of a long-standing line of credit, would also help, theoretically.

PNC opened applications on its website Friday night, but did not announce it to customers (at least not to us) via email.

Not wanting to wait to hear back, we checked the PNC website, and after clicking around a bit found out that the bank was accepting applications online. Do not try to apply with a branch, the website is the only way to submit an application, it said.

Very observant readers might have noticed a bit of a lull in our news coverage midday Monday as we tried to navigate the application process. At first, we had trouble getting the application to load. Then, when it did, we started working our way through the questions and uploading the appropriate documents.

The first issue we encountered was that the application said an IRS Form 941 — which reports “income taxes, social security tax, or Medicare tax withheld from employee’s paychecks” — was one of the documents we should submit. The problem is we don’t file Form 941, as we — like many other small businesses — use what’s called a PEO.

A PEO, or a Professional Employer Organization, is basically a full-service payroll provider that also handles some of the administrative work and human resources functions involved. A PEO files its own Form 941 on behalf of all of its member organizations — as in, every company for which it works is on the same form, and we don’t file the 941 individually nor have access to it.

Justworks, our PEO, assured us the Small Business Administration had actually ruled that it was not one of the required documents, even though banks were still asking for it. They instead set up a tool to generate a nifty PPP report, letting you instantly download spreadsheet that (we’re told) met the SBA requirements. We uploaded that to the PNC application and prayed it would be enough.

The second issue we encountered was more daunting. The PNC application had you download a PDF, which you then had to initial, date and apply an electronic signature. Luckily, we had the software and the technical acumen to do that. Unluckily, it didn’t work. Again and again, we would upload the document and be told that the signature was missing.

(Others have reported similar experiences.)

Thankfully, a deep search of Twitter provided the answer. One random user, communicating with the PNC customer help account, said they had solved the issue by switching from Mac to Windows. Our owner emailed himself all of the required documents from his MacBook, fired up the original Dell desktop computer used in the early days of ARLnow a decade ago, and re-did the entire process.

This time, after a couple hours of work, the application went through. And email confirmed the submission and assigned an ID number in the high 10,000s.

“We will review your application for completeness and notify you with next steps,” the email said. “Given the strong expected demand for loans under the Paycheck Protection Program, delays in processing your application are expected. Information about your application status will NOT be available through our branches or Customer Service Contact Centers – due to the nature of this loan process and the steps involved.”

It has since been reported that bank employees have been working around the clock in shifts to process a tsunami of PPP applications. But that work was not apparent to us over the next two weeks.

Lots of watching our email inbox, frequent checking of the application status page, and a check-in email with our branch manger. The only update: “under review.”

An email from PNC confirmed what we already knew: that the money had run out and we were still in line. But, a glimmer of hope.

“We will continue to process your PPP application that has already been received for future registration should the SBA extend the PPP program and begin taking applications again.” 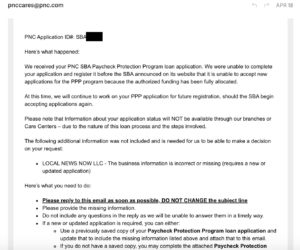 And then, another hopeful sign: a new email with a subject line referencing our application ID. Had it been approved?

“The business information is incorrect or missing (requires a new or updated application),” the email said.

It provided no other information about what was missing. A review of our application showed nothing that seemed out of line, and asking what was incorrect or missing was not an option.

“Please note that Information about your application status will NOT be available through our branches or Care Centers – due to the nature of this loan process and the steps involved,” the email said. “Do not include any questions in the reply as we will be unable to answer them in a timely way.”

We filled out the application again, signed the PDF again, and sent it in, along with the Justworks spreadsheet and an additional letter from Justworks explaining what a PEO is and how its spreadsheet has everything the SBA needs to know. Fingers were crossed as the end button was pressed.

Nothing has changed. The status still says “under review.”

“With the significant volume of applications already submitted to PNC and other lenders, it is quite possible that not every qualified applicant will receive loan proceeds under the PPP even if Congress authorizes additional funding,” the bottom of the status page says, before reiterating: “Information about your application status will not be available through our branches or Customer Service Contact Centers.”

We’ve been taking several other actions to try to hedge our bets — applying for grants, deferring some payroll taxes, opening an account with a smaller bank — but we just don’t know what the future will hold. For now, we’re all still here, working hard covering our communities, serving our clients and trying to keep the lights on.

PPP is a worthy program, intended to keep small businesses afloat and their employees paid during the coronavirus crisis. But there will be winners and losers in the end, and the worry for us and many others is that we’ll end up on the wrong side of that ledger.