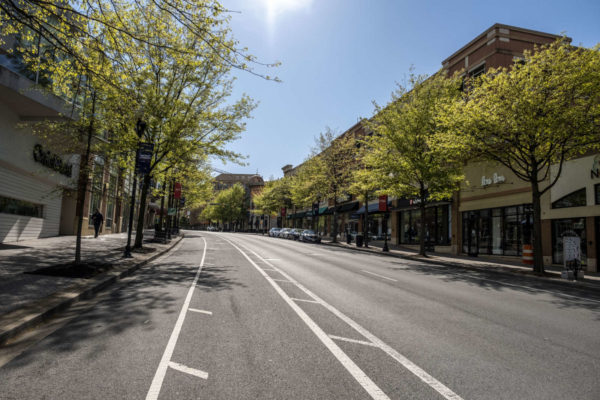 There’s growing evidence that the outdoors are, other than one’s home, the safest place to be during the pandemic.

A study in China revealed that the vast majority of outbreaks reviewed were the result of indoor transmission of the coronavirus. Former FDA commissioner Dr. Scott Gottlieb discussed the findings on social media and on CNBC Thursday.

“I think local governments, state governments should be looking at what activities we can move outside, because things can be done outside,” Gottlieb said. “You want to have religious services, you should think about moving them outside. Gym classes, restaurant tables, anything that we can move outside heading into the warm months I think you’re going to have a safer environment for doing things.”

The coronavirus is a highly contagious and deadly disease that is not going away anytime soon. There are no miracle cures at this point, just ways to slow the spread.

Staying quarantined until a vaccine comes, if a vaccine ever comes, might be necessary for those most at risk — those over 65 and with certain chronic health conditions — but it’s not a viable long-term option for the entire population. Many months of home isolation would likely lead to an economic calamity and, well, human nature seems to suggest that lots of people would eventually rebel against it.

Thus, some level of opening up is coming. As Bill Gates wrote on his blog yesterday:

Most developed countries will be moving into the second phase of the epidemic in the next two months. In one sense, it is easy to describe this next phase. It is semi-normal. People can go out, but not as often, and not to crowded places. Picture restaurants that only seat people at every other table, and airplanes where every middle seat is empty. Schools are open, but you can’t fill a stadium with 70,000 people. People are working some and spending some of their earnings, but not as much as they were before the pandemic. In short, times are abnormal but not as abnormal as during the first phase.

The rules about what is allowed should change gradually so that we can see if the contact level is starting to increase the number of infections. Countries will be able to learn from other countries that have strong testing systems in place to inform them when problems come up.

Urbanists have been calling for closing some streets to cars to allow better social distancing for pedestrians and cyclists for weeks now. So far, Arlington has not responded with any solid plans to do so. But what if closing some streets not only allowed safer outdoor recreation, but boosted local small businesses?

Such a scenario might be possible as the curve bends and growth of new COVID-19 cases goes down.

Imagine Clarendon and Wilson Blvds closed in Clarendon, at least on weekends, allowing restaurants and shops to spread out tables and store shelves while pedestrians strolled in the street — a giant sidewalk cafe. Gyms could get in on the action as well. And that could be repeated in Ballston, Crystal City, Westover, and other business districts.

Sure, you would have to have a way to ensure it doesn’t get too crowded. And those who are not dining should be wearing masks to help prevent spreading disease to others, even if it’s less likely to happen outside. Also, such activity would be weather dependent, labor intensive (for businesses, police and county officials), and wouldn’t necessarily be the salve that keeps restaurants in business through the end of the pandemic, whenever that may be.

But as we discussed around the 40 minute mark of last night’s Zoom chat with local business owner Scott Parker, it could be a start and a source of hope and normalcy.