Sponsored by Monday Properties and written by ARLnow,  Startup Monday is a weekly column that profiles Arlington-based startups and their founders, plus other local technology happenings. Monday Properties remains firmly committed to the health, safety and well-being of its employees, tenants and community. This week, Monday Properties is proudly featuring 1000 and 1100 Wilson (The Rosslyn Towers).

Hasenei runs GoLisey, a “glam gown” company she started in 2015 after surviving breast cancer. The hospital gowns are brightly colored and aim to boost spirits, but are no less medically functional than the usual drab coverings.

The gowns can be worn in either direction, with access to the front or the back depending on the specific medical needs.

“Elise wanted to do something to help during this trying time in the healthcare industry, so she reached out to VHC to donate all of the gowns she currently had in stock, for men and women alike,” Hansenei’s niece, Megan Wrobel, said in an email. “She dropped four boxes of Glam Gowns to the donation center on Tuesday afternoon, which serendipitously ended up being located in the Oncology wing; an area she was, of course, familiar with.” 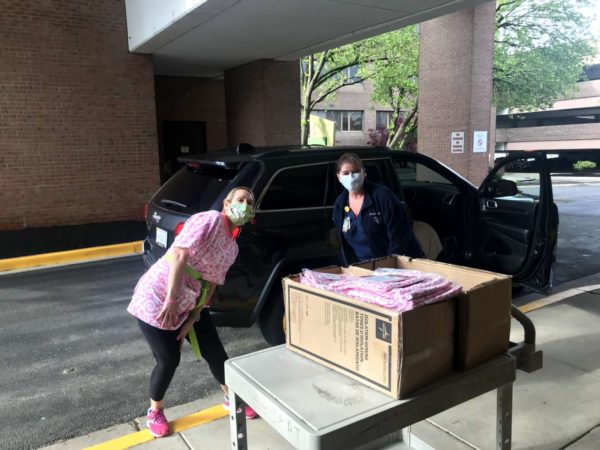 Hasenei said when she was going through cancer treatment, she always hated the gowns.

“I never felt depressed about cancer until radiation and I just had to put those ugly things on,” Hasenei said. “I can sow a little bit, so I started playing with the pattern and people started saying ‘that’s fabulous.’

After making a few, Hasenei started to get serious about the idea of making them on a larger scale. Hasenei put together a design with a pattern maker and started working with a factory in Brooklyn to produce the designs while she handled the business from her Arlington home. Since then, Hasenei has moved production to a facility in Fairfax County.

The gown business is a second job — her main career is coaching and consulting businesses — and Hasenei said the gown line was never intended to make her rich.

“Didn’t start the business to be a big moneymaker,” Hasenei said.”It’s really been about — one gown at a time — making a difference.”

When COVID-19 hit, Hasenei said her brother-in-law sent her a message about people in New York seeking gowns and masks. When it became apparent that hospitals nationwide were starting to run low on supplies, Hasenei decided to donate to the hospital where she’d received treatments.

Other local organizations, like Marymount Nursing School, have also donated items like gowns and masks to VHC.

“I reached out to contacts who put me in touch with the hospital,” Hasenei said. “I gave them everything I had. I was able to deliver those, and we’re waiting to see how they’re distributed.”

Now, Hasenei said the factory is “full tilt” making masks, which will be included in the next round of donations to VHC.