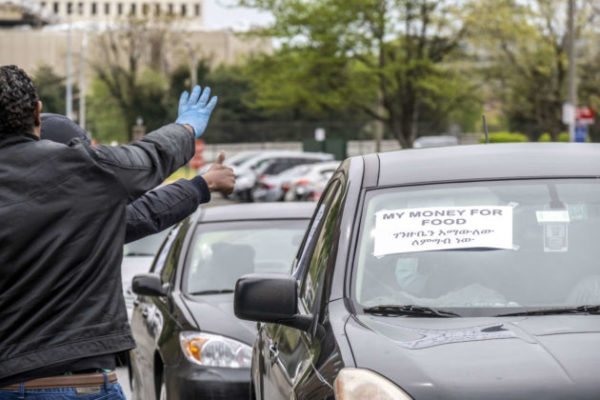 Several local and regional advocacy groups are planning a strike along Columbia Pike tomorrow (Friday) against the collection of rent during the coronavirus crisis.

Nationally there has been a numerous of strikes against paying rent during the pandemic, with many service workers or low-income families are out of work. New Virginia Majority — a progressive organization aimed at rallying marginalized communities — is planning statewide action along with Tenants and Workers United, Asian American Civic Engagement Collaborative, and the Virginia Student Power Network.

“In Arlington, members will meet at 2:30 p.m. and caravan in their cars along Columbia Pike apartment complexes — where many Asian, Latinx, African and Black tenants reside,” New Virginia Majority said in a press release. “Those who cannot join will make posters and selfie videos to post online.”

Debra Freeman, communications director for New Virginia Majority, said the format of the protest will likely be similar to the protest outside the Southern Towers apartment complex in Alexandria two weeks ago. While the Alexandria protest faced some criticism online as being disruptive to people in the building, Freeman said the goal is to put the issue in the public spotlight. 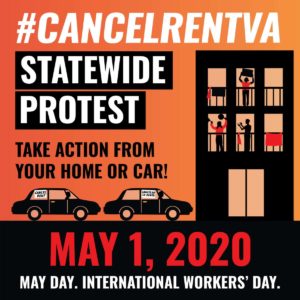 “We’ll be going to caravan up and down Columbia Pike with signs,” Freeman said. “It doesn’t just affect one particular apartment community or one landlord, it’s across the board. It’s everywhere. People may not be thinking of service workers — who can’t make income [during the pandemic]. It’s about awareness.”

The protests follow a Cancel Rent petition that circulated around the state and gathered nearly 3,000 signatures. The petition asked federal and state officials to cancel rent collection as well as suspend the accumulation of rent debt. It also asks for a halt to evictions, though evictions are banned in Virginia through May.

“We live paycheck to paycheck and often work full time but still can’t make ends meet,” the petition says. “During this crisis, we are struggling to pay for basic necessities like food, medicine, and housing.”

Michelle Chan, an organizer with New Virginia Majority, equated freezing rent with the government stepping in to stop price gouging on essential goods like hand sanitizer.

“There are a lot of folks are community members who are not making any money right now,” Chan said. “Any stimulus money, and funding to folks, should go to feeding their families.”

Chan said that one of the goals is to try to work out a better deal for renters with large property owners. Organizers are still hammering out details with community members as the group heads into the protest, she said.

Organizations are encouraging those who see the Pike protest driving by to join in.

“I hope the takeaway is that we’re all in this together,” Freeman said. “Only by coming together and supporting each other are we going to get on the other side of this.”