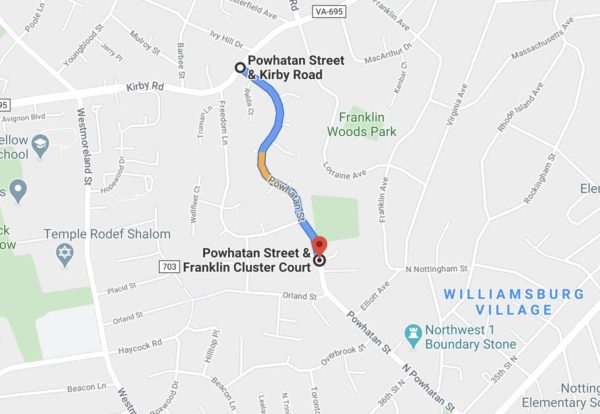 A pair of agreements on Saturday’s County Board docket could strengthen the ties between the water systems operated by Arlington and Fairfax counties.

One agreement would formalize an existing arrangement, in which each water system serves a few hundred of the other county’s customers. Arlington currently serves 369 Fairfax customers along Powhatan Street in the McLean/Falls Church area, while Fairfax serves 313 Arlington customers in the Boulevard Manor and Dominion Hills neighborhoods.

An older agreement was formerly in place between Arlington and the City of Falls Church, before the latter system was acquired by Fairfax Water in 2014. The new agreement would codify the existing arrangement. A county staff report says that about $4,000 changes hands annually to adjust for differences in water usage between the cross-jurisdictional customers.

The second agreement would have a more tangible outcome.

It calls for construction of a nearly $3 million water main between the two water systems, under Powhatan Street in Fairfax County. Arlington would pay just over $2 million of the cost, but the new, 16-inch transmission pipe would be maintained by Fairfax County.

While Arlington has several redundant transmission mains running under the Potomac and Chain Bridge from D.C., the aqueduct is its sole water source.

“The Powhatan Street Main project is budgeted in the Utilities portion of the Fiscal Year 2019-2028 Capital Improvement Plan,” notes the county staff report on the agreement. “Sufficient funds are available in the Utility Construction Fund to provide for the construction of this project.”

With Fairfax County funding the pipe’s maintenance, “the only future costs would be the wholesale cost of water purchased during times of emergency, which would be funded from the Utilities Fund operating budget.”

This project provides redundancy for Arlington County’s water supply in case of emergency. Currently, its sole water supply is from the Washington Aqueduct.

Read more →
More Stories
BizTalk: Arlington Companies Join Fight Against COVID-19Modern Mobility: What Transportation System Do We Want to Get Back?