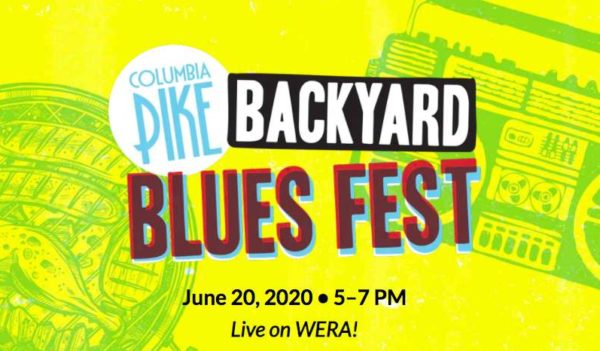 The annual Columbia Pike Blues Festival isn’t exactly canceled this year, but with lingering concerns about large crowds during the phased reopening of the region, the Columbia Pike Revitalization Organization is radically rethinking the event while hoping to keep the spirit intact.

Officially, the 25th Pike Blues Festival will be held in 2021, but in the meantime, CPRO is planning an alternative Backyard Blues Festival on June 20 from 5-7 p.m.

Arlington community radio station WERA 96.7 FM will play a curated selection of blues while various local restaurants will offer special discounts on food and drinks, which can then be enjoyed in one’s backyard or patio with the radio cranked up.

“The Blues Festival has always been such a wonderful celebration of our community and, as it was necessary to postpone it this year, we really wanted to find an alternative celebration that could still bring the community ‘together,'” CROP Executive Director Kim Klingler said. “All of us at CPRO have been eagerly anticipating the 25th Annual Blues Festival and were quite disappointed at the prospect of cancelling the festival completely. But, through our partnership with Arlington Arts, we were able to connect with WERA and come up with a creative way to keep groovin’ and show that defiant, hopeful spirit that truly exemplifies Columbia Pike.”

CPRO isn’t the first local organization to try to encourage Arlingtonians to jam out to music outdoors at the same time. The Crystal City BID launched a similar Front Porch Friday series in April. Klingler said the idea of playing music over the radio outdoors is “very retro.”

“The Columbia Pike community really feels a strong sense of pride and ownership over the annual Blues Festival,” Klingler said. “It is hard to imagine summer on Columbia Pike without the blues.”

Klingler said the festival will include giveaways and social media contests. CPRO is still working through the details of the specials on food.

“We are still working out a few details with our vendors, but we’re hopeful all of the local restaurants who have participated in the festival for years will participate this year as well,” Klingler said. “Most of our vendors are brick and mortar restaurants located near Columbia Pike and S. Walter Reed Dr. where the festival typically takes place and we wanted to ensure we are supporting them through these difficult times in any way we can. Listeners can order their favorite festival foods and have their beer and wine delivered. New District Brewing Co. is even preparing a specialty ‘Blues Fest Brew’ for the occasion.”

“We hope everyone will drag their radios outside — or tune in online — and spend a couple hours filling backyards across Arlington with the best blues has to offer,” Klingler said. “I think we’ve all had the blues for a while now and a Backyard Blues Fest could be just what we need.”

END_OF_DOCUMENT_TOKEN_TO_BE_REPLACED

More Stories
Testing Up, Deaths Now Over 100 As Reopening in SightAsk Eli: Why Can’t I Find a House!?