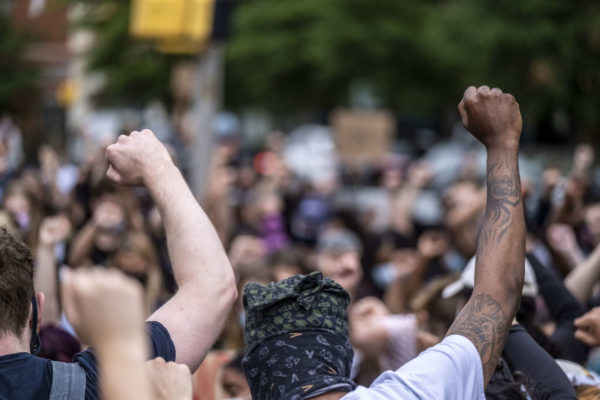 (Updated at 10:40 p.m.) A number of peaceful marches against racism and in support of Black Lives Matter are planned in Arlington through Sunday.

The first will be taking place from 5-7 p.m. today (Thursday), marching from the county parking lot in Courthouse to Clarendon to demand justice for George Floyd “and those who have been directly affected by systemic racism.” Some county offices are closing early due to expected crowds.

ARLINGTON FRIENDS: I have no part in organizing this but there is a protest organized for tomorrow! I made these graphics for personal sharing and all the information is pulled directly from the description so I am taking no credit in anything but feel free to use this as a shareable resource to get the word out! (If any Arlington friends would like an invite to the private Facebook event shoot me a DM!! only doing people I know) . Any other creatives with similar resources please feel free to share! . For those coming out tomorrow make sure to do your research on how to stay safe! I’ll try to compile some more helpful tools relatable for Arlington! And remember #blacklivesmatter

Another is planned Friday evening, in memory of Breonna Taylor, who was fatally shot by Louisville, Kentucky police officers in March.

Demonstrators will march from Bob & Edith’s Diner on Columbia Pike to the county courthouse, starting at 6 p.m., according to social media posts.

The third march is planned Saturday from noon-5 p.m. and is expected to be a “large scale event.” The march will go from Courthouse to the White House, via Rosslyn and the Lincoln and MLK memorials in D.C.

From an event page on social media:

Arlingtonians are coming together to stand in solidarity in a peaceful protest against racial oppression.

We will convene at the Arlington Courthouse at noon on Saturday, June 6 and march together past the Iwo Jima Memorial and across the Memorial Bridge to the Lincoln Memorial and the Martin Luther King Memorial. From there, we will march up to Lafayette Park to join peaceful protests demanding meaningful and urgent reforms for racial justice.

All are welcome and loved. Bring a mask and join us! 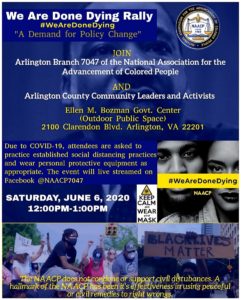 The local branch of the NAACP will be participating, the group said in a statement. The marching will be preceded by a rally from noon-1 p.m. in front of county government headquarters at 2100 Clarendon Blvd.

“Elected officials and members from the Arlington Branch NAACP, community activists, and elected leaders will be in attendance,” the organization said. “This is expected to be a large scale event and expect 250-500 attendees.”

County Board members Christian Dorsey and Libby Garvey, along with 1776 co-founder Evan Burfield, are listed a co-hosts on the Facebook event page for the Saturday march.

https://t.co/GP46KzJpXc. Join us in a peaceful march on Saturday. Wear face coverings, keep some distance, but we all need to come together to demand justice and that our nation live up to “all men (and women) are created equal”. It’s time!

Prior to the rally, a march from the Columbia Pike Branch Library to Ballston and then Courthouse is planned, starting at 10 a.m. at Welburn Square in Ballston, marchers will pause “to say the names of those who have lost their lives at the hands of police brutality and hold space to reflect as a community.”

On Sunday, another protest march is planned from 5-7 p.m., starting at Green Valley Pharmacy (2415 Shirlington Road). The march will “support #BlackLivesMatter as well as gun violence awareness.”

Read more →
More Stories
What’s Next: The Leadership of Changing CoursePhotos: Hundreds Take to the Streets for Anti-Racism Protest