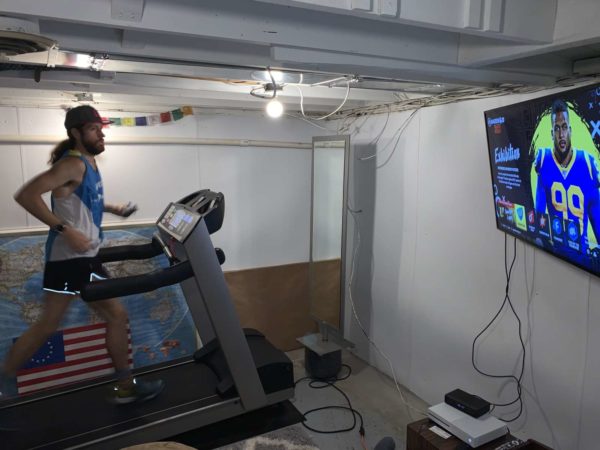 Starting at 6 p.m. Saturday, Wardian says he’ll start running with an aim of breaking the 50K record (around 31 miles) in around two hours and 57 minutes.

For Wardian, it’s an attempt to take back a record he previously held, but one that he says has been broken a few times since quarantine started and more runners looking for records to beat have taken to treadmills. Wardian says he’s not worried.

“I’ve set a bunch of world records on the treadmill, I’m pretty confident,” Wardian said with a laugh. “There’s nothing you have to worry about other than picking your feet up.”

It would not be the first record Wardian, 45, has set during the pandemic. In April, he ran 262.52 miles in a loop around his neighborhood as part of a quarantine ultramarathon challenge.

Wardian said he enjoys the treadmill because it feels like the most “fair” kind of running, without other factors in the course that can give runners an advantage or disadvantage. He noted that at marathons people only usually see the runner at the start and the finish, but on a treadmill run they can watch him or her the whole time through the race.

“There’s going to be a live stream,” Wardian said. “We’ll send a link out later today and people can Zoom or they can go to my Facebook, Instagram or Twitter and can make requests during the run. I think it will be awesome. We’ll have announcers and people there going for other records.”

“Like a lot of things, it takes a lot of practice,” Wardian said. “A big part is just knowing where all the buttons are and changing the inclines. If you are running, you may want to put it at one percent grade because it mimics being outside. I also recommend changing the incline if you’re on a long run so your feet don’t hit at the same place every time.”