(Updated at 4 p.m.) Arlington County workers power washed away Black Lives Matter chalk art in front of a home in the Boulevard Manor neighborhood this morning.

An outraged neighbor posted on social media about the removal of the chalk art, which featured words and phrases like “There comes a time when silence is betrayal,” “Justice 4 All,” “MLK,” and “BLM.” A portion of the art was on the county-owned sidewalk and road, while the rest was in the home’s driveway.

“I am both saddened and outraged. My friend and colleague at Ashlawn has had a formal complaint made about her daughter’s chalk art on the driveway, sidewalk and street in front of their home,” wrote Dana Crepeau. “I spoke with the Arlington County employees, who did not want to remove the chalk but were told they must. I asked permission to post their photos.”

“It appears the neighbor who called the county has previously taken it upon herself to erase other chalk drawings in support of Black Lives Matter,” Crepeau added. She noted that today (Friday) is Juneteenth, a day that celebrates the emancipation of the last enslaved persons during the Civil War, which just became a state holiday in Virginia.

“Do I understand correctly that the county forced Black employees to erase messages in support of Black Lives Matter on Juneteenth and apparently saw no problem with that?” asked a commenter on Crepeau’s Facebook post.

“Yes, you are understanding this correctly,” she replied.

The residents were not home when an ARLnow reporter knocked on the door shortly before noon. The mother of the girl whose art was erased — Yvaal Hampton, a second grade teacher at Ashlawn Elementary — said in an email sent to the neighborhood listserv that “today, I feel like an outsider.”

When my family and I moved into the neighborhood about a year and a half ago we were welcomed by a few amazing neighbors and I thought “this is going to be great.” Well today, I feel like an outsider. With the on-going racial climate that we are in, my kids and I wanted to express some of our feelings and thoughts in chalk outside of our house. Not a novice idea, right? Well this morning I hear loud voices outside of my window, so I go outside to see what’s going on. There were three African American city workers outside power washing our chalk expressions/drawing away because a neighbor complained. I had a lot of emotions running through me, but then one of the gentlemen said “Miss I don’t really want to have to do this, but my boss told be that I have to do it.” Then I felt sad for them, they were forced to remove a Dr. King quote and children’s artwork because a neighbor felt someway about it (angry, threatened… who knows). If it were flowers and sunshine drawings would she have complained?  Today, I feel like an outsider, but this outsider stands by her chalk messages “Justice for All”, “There comes a time when silence is betrayal.” Thank you Dr. King for your wise words. #BlackLivesMatter

ARLnow is still awaiting an official statement from Arlington County, which held a Juneteenth Peace Rally in front of county government headquarters in Courthouse this morning. (Update at 9:15 a.m.: The county issued an apology last night.)

Arlington County Board member Christian Dorsey told ARLnow that he is disturbed by the incident and awaiting more information on what happened. In the meantime, he offered an apology to the residents.

“We await a full understanding of the facts, but what is known at the moment disturbs us greatly,” Dorsey said. “It was a mistake to prioritize responding to this call during a pandemic where our workers should not be deployed unnecessarily. Furthermore, removal of the chalk art from a driveway apron, widely known to be the responsibility of the resident, was wrong.”

“We apologize to the residents for erasing their expressions from their property and to our workers who were directed to do it,” Dorsey continued. “That this occurred as our County gathered to reflect on the unfulfilled promise of Black liberation on Juneteenth adds further insult, and compels us to confront the role of our government in perpetuating systemic inequities. We can, must, and will do better.”

County Board Chair Libby Garvey said she has spoken with the family of the girl who created the chalk art.

Ingrid Morroy, Arlington’s elected Commissioner of the Revenue, weighed in via social media on the fact that county workers were not given the day off, as were their counterparts in state government, in Fairfax County and elsewhere.

That is disappointing. I closed my office today and gave my staff the day off to observe Juneteenth. The only public office in the County, I believe.

As of earlier this afternoon, prior to a rainstorm, the words “Black lives matter” were back on the street and sidewalk in front of Hampton’s home. 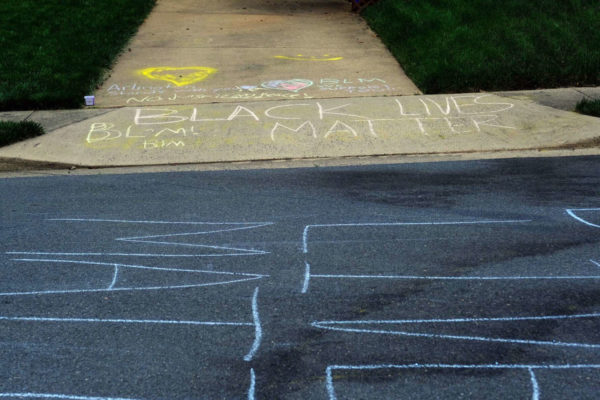