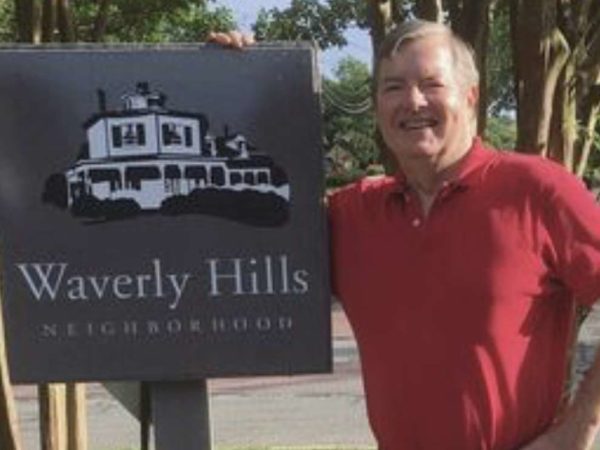 Jim Pebley died after a battle with cancer on Tuesday, June 23. The day prior, George Keating died of a sudden heart attack.

The following obituary of Keating was written by former Arlington School Board member Elaine Furlow.

George Markey Keating, 71, a longtime civic activist in Arlington, Va., died suddenly of a heart attack on June 22, 2020. As a three-term president of the Waverly Hills Civic Association, Keating championed numerous neighborhood improvements, working closely with Arlington County officials and stakeholders. Most recently, after his retirement, he was tireless in his efforts to improve stormwater drainage in the most flood-prone areas of Arlington.

In 2018 and 2019, as reported by ARLnow.com, water was flooding cars and basements at record levels. When water was rushing down neighborhood streets, Keating helped document the situations and the despair that his neighbors felt. In the county manager’s Capital Improvement Plan (CIP) released this June, $50.8 million has been proposed for stormwater management bonds for consideration by the voters on November 3.

“On issues large and small, George was as gentlemanly as he was passionate about the future of Waverly Hills and the Lee Highway corridor,” said County Board member Katie Cristol. “When the neighborhood experienced historic flooding two years in a row, it was George who capably organized other residents to advocate for new public investments, and who worked diplomatically and analytically with County staff in developing projects.” Cristol said Keating’s passing “is a loss for the community, and those of us on the County Board will truly miss working with him.”

“When it came to community participation,” recalled Sandi Chesrown, vice-chair of Plan Lee Highway, “George didn’t just talk about helping–he immediately and tenaciously tackled whatever the issue, benefiting his Waverly Hills neighborhood and Lee Highway Alliance.  We will always be grateful for George’s friendship and leadership.”

The five miles along Lee Highway in Arlington are soon to undergo redevelopment that combats climate change, strengthens housing and retail, and improves walkability and attractiveness of the corridor. The Lee Highway Alliance (LHA), a consortium of civic groups, business and property owners, and interested citizens, first started the work more than a decade ago. Keating was a member of LHA’s Community Advisory Committee (LHA CAC) and also a member of the Plan Lee Highway Community Forum.

He also helped to gain County Board approval for the Artis Senior Living project, which will add housing options for older residents who need assistance. Ginger Brown, LHA’s executive director, said, “George truly believed in housing for all ages and income levels.”

Tyler Wilson, past president of the Waverly Hills Civic Association, remarked, “Every successful community needs a few people with initiative, motivation and the energy to focus on the greater good and to create a sense of togetherness. George had all those qualities and more.”

Keating is survived by his wife Ellen, sons Owen and Brendan, and granddaughters Eleanor, Alice and Mercedes. He graduated from Georgetown University in 1971 and completed a Master’s degree in American Studies from the University of Minnesota.

Keating loved books and authors. He spent his career in publishing, first managing Canal Street Books in Georgetown and Brentano’s stores in Connecticut and New York. He joined Simon & Schuster in 1978 as a sales representative and rose to become the eastern divisional sales manager. He helped launch and promote a stream of authors including David McCullough, Doris Kearns Goodwin and Bob Woodward. After leaving S&S, he became director of sales and marketing at the Naval Institute Press, helping to revitalize its book publishing division. Keating retired in 2015.

END_OF_DOCUMENT_TOKEN_TO_BE_REPLACED

More Stories
Legal Insider: Fairfax Students with Learning Disabilities File Complaint Against FCPSVideo: People Keep Cutting Across I-395 to Get to the HOV Bridge