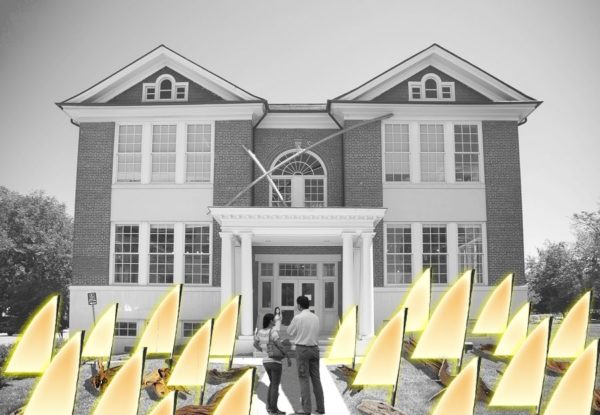 Local artist Lynda Andrews-Barry‘s display of 25 wooden slave ships, formed from driftwood collected from the Chesapeake Bay, will fill the lawn in front of the arts center. The ships will be staked into the ground and have sails that collect sunlight during the day and light up at night.

This site-specific project was conceived through researching Arlington Arts Center and its location in the former Maury school. The institution’s namesake, Matthew Fontaine Maury, was a native Virginian astronomer, historian, oceanographer, meteorologist, cartographer, author, geologist, education, United States Navy officer, and Chief of Sea Coast, River and Harbor Defenses for the Confederacy. However, Maury was not a proponent of American slavery. Instead he favored relocating slaves (and their owners, if desired) to the Amazon, and sent a crew there to map the river and determine if his plan was feasible.

Maury’s proposal was part of a broader movement to relocate, rather than integrate, Black Americans formerly held as slaves. A school in Alexandria is also named after Maury.

The artwork commemorates the 12 million people captured and loaded onto those ships as cargo, some of whom Barry said she is descended from.

Megan Niewold, director of development at the Community Foundation for Northern Virginia, said the project was funded by a $10,000 grant. Niewold said the focus of the grant this year was on funding public art that was helping to transform communities.

“We wanted to do public art opportunities that were accessible for everyone and in a diverse area,” Niewold said. “[The project] had to be public, interactive, environmentally friendly, and had to talk about a big topic and encourage heavy discussion.”

Niewold said ten submissions were considered in the final review, but a volunteer grants committee was particularly impressed with how this design tackled race relations and the history of the Maury school — as well as the use of reclaimed driftwood.

The project was originally supposed to go up in April, Niewold said, but the foundation didn’t want to promote more public art during the height of COVID-19 so the timeline was changed to mid-August.

Image via The Community Foundation for Northern Virginia