Givr started with a sermon that founder Mark Ferguson just couldn’t get out of his head.

While attending church in 2019, Ferguson said his pastor gave everyone two minutes and told them to write down the names of eight neighbors. He couldn’t, and neither could many of his fellow parishioners.

The second part of the idea came when Ferguson switched jobs and started walking to work in Arlington.

“It coincided with me changing jobs and walking to work,” Ferguson said. “For the next few months, I was thinking about [the sermon]. I downloaded a neighborhood app, I was inviting neighbors to dinner. But as I was walking to work, I realized my viewpoint on who was my neighbor changed.” 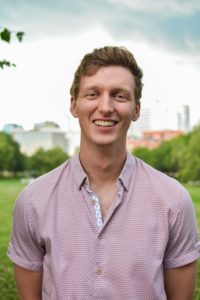 Ferguson said he began to see the same people on the streets around Clarendon, and in talking to coworkers and friends said that many of them saw the same people as well, but didn’t know their names. After Ferguson was laid off from a venture capital firm in March, he said he felt an obligation to do something about the idea that had been rattling around in his head.

With Givr, subscribers can receive two care packages per month to distribute to neighbors dealing with homelessness. The packages are $22 per month, or less with other subscription plans, and contain food, clothing, hygiene items, and seasonal needs like winter clothing or sunscreen.

Givr was started not just as a way to help people experiencing homelessness — local nonprofits like Arlington Food Assistance Center (AFAC) are experienced and uniquely situated for that — but as a way of connecting people to their neighbors.

“When you look at us you might say ‘this is a way to distribute aid’ as the actual product or something, but we don’t think about it like that,” Ferguson said. “We will measure bags and care packages distributed, but what we really care about and track on our end is names learned. It’s less about how much aid we can provide vs how much community we can build.”

It isn’t a new idea, Ferguson acknowledged. He said his girlfriend has been packing bags like this for months with items like socks and granola bars, to be thrown into her car and distributed. Churches and rotary clubs put similar packages together. What Ferguson said he hopes Givr can accomplish is taking the assembly stage out of it and using the startup model to spread the implementation.

“What we do is we assemble these care packages and ship them on a monthly basis to givers who sign up for our service,” Ferguson said. “You sign up and we’d send you a care package, which would include items that people experiencing homelessness really and truly need.” 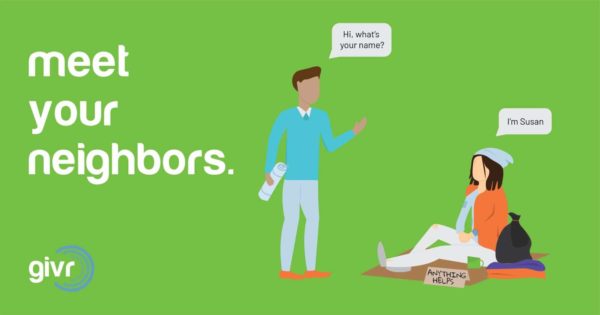 As he and his co-founders started putting together the project, one of the big lessons Ferguson said he learned was that food is not always the most essential need.

“A lot of times you assume ‘give them as much food as possible’ but that’s not really the most impactful,” Ferguson said. “A lot of people on the streets know where to find food. But what they don’t have is means to keep themselves warm and keep themselves clean. Our bags prioritize those items, in addition to the food that comes in them.”

As the program gets off the ground, one of the things Ferguson hopes to build on is customized packages.

“Let’s say I send you a bag and you get it and walk to work and meet Susan,” Ferguson said. “Susan doesn’t need more granola bars and t-shirts, but maybe she has kids and needs diapers. You can write back and say “I met Susan, she needs diapers” and we’ll try to partner with other organizations to try to make bags that fit the needs of the person you know.” 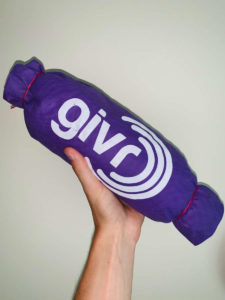 The packages also contain guides for the subscriber — pointers on how to approach and talk to people experiencing homelessness in ways that aren’t condescending. Some of those lessons came from ride-alongs with a woman in Roanoke who Ferguson said is locally famous for distributing items to the local homeless population.

“It encourages people to think about this in a normal way and normalize the experience,” Ferguson said. “Instead of saying something like ‘you matter so much’ [think about] the fact that you’re highlighting it, which would imply that you’d normally think they don’t matter. That’s why we focus on the name. Say ‘I got this care package, what’s your name?'”

Right now, Ferguson said he’s trying to experiment and see whether more homeless people prefer care packages in something like a tote bag or in transparent containers where they can see what’s inside.

As it gets closer to launch, Ferguson said the issue he’s been grappling with the most is running a startup that is not a non-profit but still aims to make an impact on homelessness in communities.

“We were selected by Georgetown Law’s legal clinic as a client because as I was going through 501c3 status and thinking ‘this has to be a non-profit,” Ferguson said. “But Georgetown provided guidance that said ‘you guys need to be an LLC; you’re not going to pass as a non-profit for a couple of reasons.’ We’re currently structured as a social enterprise, but still actively pursuing the 501c3 route in hopes of gaining a 501c3 status.”

COVID-19 has also had an impact on the project’s development. Originally, Ferguson said the plan was to approach churches, then businesses, and talk to them about buying subscriptions and having their church members or employees distribute those packages to the community. But with coronavirus putting fewer people in church pews and in businesses, Ferguson said their distribution model was flipped, with the focus on going directly to consumers.

The project is currently signing up subscribers and getting ready to start sending care packages in August.