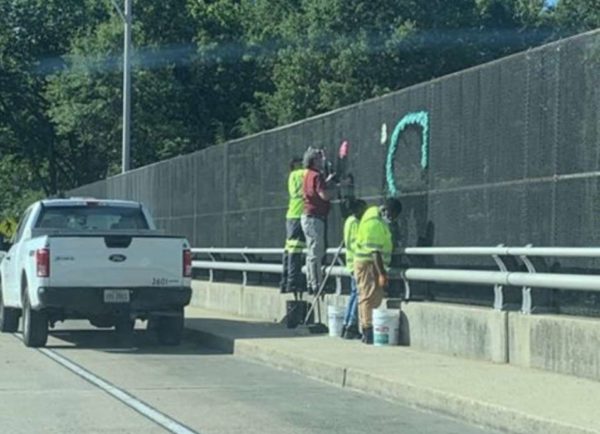 Arlington County is clarifying how it responds to reports of graffiti, following the controversial removal of a child’s Black Lives Matter chalk art on Juneteenth.

The June 19 incident — which started as a neighbor’s complaint to the county — garnered widespread outrage, prompted an apology, and led County Manager Mark Schwartz to reflect on the policies that led up to it.

“[Does] our complaint driven enforcement efforts lead us to address concerns (regardless of how serious they are) by some residents for any problem that frustrates them, while larger problems that affect our residents go unaddressed?” he asked in an internal memo.

Notably, the policy does not allow for exceptions based on the content of the graffiti, which would be a likely violation of the First Amendment.

There’s a big caveat, however, which could have applied to the Juneteenth incident.

“Employees may practice judgment on effective use of resources when it comes to permanence of medium used to create graffiti. For example, sidewalk chalk or traditional stick chalk is easily and quickly removed by rain. To conserve labor resources, employees and supervisors may exercise judgment in removal of stick chalk.”

With the new policy in place, county crews were out power-washing graffiti this week, including on the S. Abingdon Street bridge over Fairlington. There, Black Lives Matter advocates and supporters of President Trump had been scrawling dueling messages on the sidewalk, while the letters “BLM” were posted on the bridge’s fence in ribbon.

The removal did not sit well with some residents on the Arlington Neighbors Helping Each Other Through COVID-19 Facebook group, who called it “disappointing” and “a shame.”

“That is awful, seriously what harm was it doing?” said one person. But others were more supportive of the policy.

“The sentiment is beautiful, however it being a public place, it’s probably for the best that it was removed to reduce conflict and keep things neutral,” said another commenter.

After a pause to establish guidelines on graffiti removal from public property, staff have resumed such cleanups this week. Once backlogs of removal requests are addressed, residents can expect new requests to be addressed within 3 business days. https://t.co/oXUHgDxjDn pic.twitter.com/NOQaABLya2