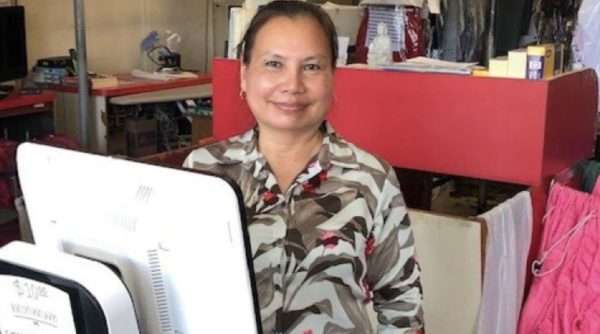 When Air Force veteran Michael Emery went to pick up his dry cleaning from First Virginia Cleaners for the first time since the outset of the pandemic, he knew the economic fallout of the shutdown hit close to home.

The store at 2929 S. Glebe Road was dark, the air conditioning was off and owner Chantra Chet had tears in her eyes as she explained to him how poorly business was going. That’s when Emery, the longtime customer of Chet’s, knew he had to act.

Emery, an Arlington resident, created a GoFundMe campaign to support the store, which is located in the Arlington Ridge Shopping Center. Revenue at the dry cleaning business has plummeted as much at 80%, according to Chet, as office workers stay at home and formal wear stays in closets.

“It’s really helped me a lot,” Chet said of the fundraiser. I don’t know how I can thank him for what he did for me.”

The GoFundMe’s goal is currently $20,000, but Emery said that number was ambitious. He feels that even raising enough to pay for a month of her rent would be a success.

So far, Emery has posted to different community Facebook groups around the neighborhood to garner support. His fundraiser has reached a wide audience, and he’s even received donations from other states. Since the fundraiser was launched on July 9 it has collected more than $3,000, with contributions still growing.

This is not the first time Chet has faced adversity. She moved to the United States from Cambodia as a refugee from the Khmer Rouge in 1982, despite not speaking a word of English, and has been working in the community for more than 35 years. She was able to buy her dry cleaning business after working there for 14 years and has been running it ever since.

Right before the pandemic, Chet had spent her entire life savings on purchasing a second location to house all the dry cleaning equipment, according to Emery, adding that when the coronavirus pandemic hit, her business was “decimated.” He noted that because business was struggling, Chet could no longer afford air conditioning or electricity. To make matters worse, her landlord increased her rent to $9,000 per month.

Dry cleaners around the country are suffering a similar fate. What had been considered a safe, steady business is not among the industries hardest hit by the pandemic.

“There were no proms this year. No bridesmaids. No men in tuxedos. All that, gone,” one owner told CBS News. “We’ve been through every economic downturn. But this?”

A software provider to the industry said that dry cleaning revenue is still down about 50% on average, and was down even more earlier in the pandemic, according to the article.

Emery described Chet as very warm and friendly, especially to her customers.

“Once you peel back the layers you see that she is incredibly hardworking and patriotic, and just very caring,” he said. “She is the embodiment of the American Dream.”

Emery hopes Chet can gain support either through donations or more business.

“At a time when people are so politically divided… I feel like she represented everything that is good about this country,” said Emery. “This felt like something very small that I could do.”