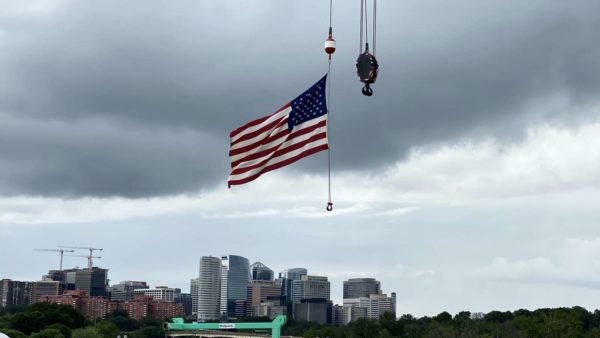 DCA Noise Study Launched — “In a partnership that stretches across the Potomac River, Arlington and Montgomery counties have launched a joint study to mitigate aircraft noise from nearby Reagan National Airport. A team of technical experts representing the suburban Virginia and Maryland counties will study flight procedures, consult residents and propose to the Federal Aviation Administration ways to reduce noise pollution.” [WTOP]

Amazon Doubling Down on Offices — Amazon “is expanding its physical offices in six U.S. cities and adding thousands of corporate jobs in those areas, an indication the tech giant is making long-term plans around office work even as other companies embrace lasting remote employment. Amazon is preparing to add 3,500 corporate jobs across hubs in New York, Phoenix, San Diego, Denver, Detroit and Dallas.” [Wall Street Journal]

State Senators Support Redistricting Amendment — “The Arlington County Democratic Committee may have come out against the state constitutional amendment on redistricting that will be on Virginia’s Nov. 3 ballot. But the three members of Arlington’s state Senate delegation say they support it nonetheless. The amendment to create a redistricting commission represents ‘a big step forward,’ said Sen. Adam Ebbin. [InsideNova]

WWII Marker Replaced by Gun Violence Garden — “In 1952, a marker was unveiled in Arlington by the Gold Star Mothers of America… In June, a handsome new garden was dedicated in that space. It was created by the Master Gardeners of Northern Virginia to honor Moms Demand Action, an organization dedicated to addressing gun violence.” [Washington Post]

Local BLM Protest Organizers Profiled — “In late May, as outrage over George Floyd’s killing in police custody roiled the nation, Anika and Yolande Kwinana decided they had to do something. Anika, 49, a program manager in the Kennedy Center’s education division, and Yolande, 28, a business development associate for Salesforce…  decided to organize a smaller demonstration themselves, in Arlington.” [Arlington Magazine]

Local Beer Store Pivots to Delivery — “Les Shaver tells the story of The Brew Shop, a specialty wine and beer store in Arlington, Va., that has been exceptionally resilient despite the impact of Covid-19. In the article, How One Small Beer Shop Tapped Into Online Sales in Response to COVID-19, Shaver recounts how owners Julie Drews and Beth Helle have been able to stay ahead of the curve by quickly shifting their brick and mortar format to online and delivery services.” [Craft Brewing Business]