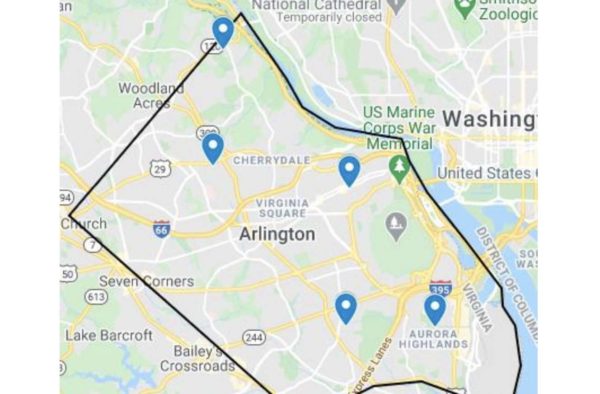 (Updated at 11:10 a.m.) There will be five places around the county at which to cast early votes prior to the November election, Arlington officials announced last night.

That’s an increase from three satellite voting locations in past presidential election years. The County Board approved the five locations at a meeting last night, citing “unprecedented demand for early voting during the COVID-19 pandemic” and concerns about the reliability of mail-in ballots.

Between 20,000 and 27,500 Arlingtonians cast early ballots in presidential elections since 2008, according to a presentation by Director of Elections Gretchen Reinemeyer. That number is expected to go up this year.

“The Electoral Board proposes to add 5 voting satellite offices to account for dramatic increases in early voting during Presidential Election years, to help reduce wait times, and increase capacity for social distancing,” said Reinemeyer’s presentation to the County Board. 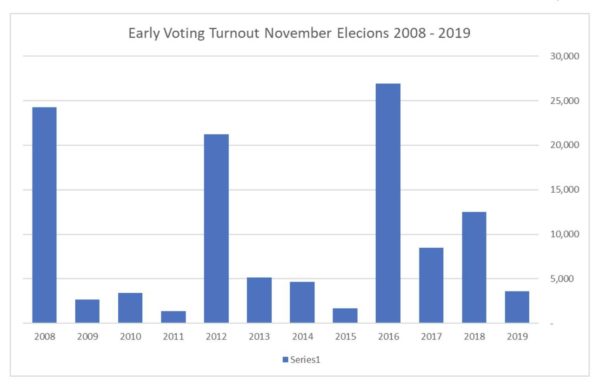 The two new early voting centers being added are the Aurora Hills Senior Center, in the Crystal City and Pentagon City area, and the Langston Brown Community Center in Hall’s Hill, along Lee Highway.

Reinemeyer said the latter will serve western portions of the county, though she noted in the presentation that “precincts on the west end of the County use early voting a lower rates than other precincts in the County.” At least one County Board watcher noted a geographic gap in the early voting center map.

Staff: Talking with DC/MD staffs, jurisdictions take about a decade to settle into early voting (finding good locations, etc.). Sites on the Arl map have moved in the past, voting officials guests at locations & have needs not all locations can provide (dedicated secure space)

Also new this year: the county is temporarily leasing a ground floor space at 2200 Clarendon Blvd in Courthouse to use for early voting, in lieu of the county government headquarters building next door. The vacant former Wells Fargo bank space will be modified to accommodate socially-distanced early voting; a line will snake around outside the center, in the courtyard area. 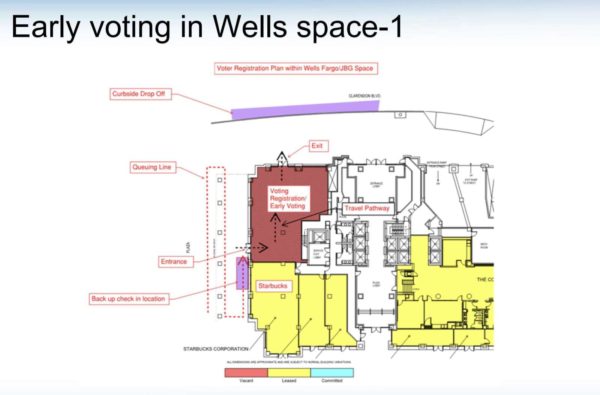 Early voting is set to start in the new 2200 Clarendon Blvd space on Friday, September 18. The other locations are expected to open in October.

The Arlington County Board today approved five satellite offices for early voting in the November 3, 2020, presidential election, in anticipation of unprecedented demand for early voting during the COVID-19 pandemic.

“The November 3 election will take place in circumstances none of us has ever experienced before,” County Board Chair Libby Garvey said “We are expecting a large turnout of voters during a pandemic that is still far from controlled. Important concerns have been raised about the Post Office’s ability to handle mail-in balloting. It is vital that the County do whatever we can to make voting easy and safe.”

The Board voted unanimously to approve an ordinance providing for satellite offices for absentee voting, also known as early voting. View the staff report.

All registered voters are eligible to vote early in the November 3 election.

The Board’s action increases by two the number of satellite locations that were available for early voting in the last two presidential elections and is meant to reduce wait times in the last week before the election. Some voters waited as much as 90 minutes to vote at the Ellen M. Bozman Government Center the week before Election Day 2016.

The satellite locations approved by the Board include:

Early voting will begin on September 18 at 2200 Clarendon Blvd, Suite R140. The remaining locations will open later in October. Hours of operation for the satellite locations will be posted on the County website by the first week in September.